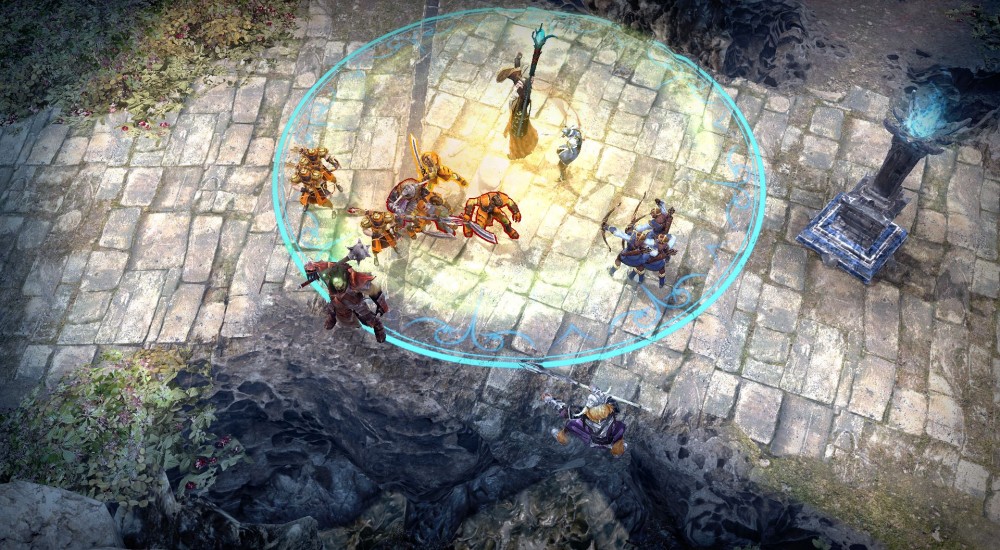 Guardians of Middle-Earth joins the pantheon of MOBA (Multiplayer Online Battle Arena) games that have become quite popular for PC players over the past couple years. There is a lack of presence of the genre on the consoles, so the Xbox 360 and PlayStation 3 focused Guardians of Middle-Earth was a welcome addition to those platforms. Almost a year later the large cast of Lord of the Rings adventurers come to PC to battle creeps and take down some towers.

After 500 hours of DOTA 2, playing a Guardians of Middle-Earth match is a nice break. I would describe it as a MOBA-lite since you have to worry about less while playing. There are no items in game to worry about buying, as there is a focus on hero abilities to make the plays and shift the tide of battle. With this emphasis on abilities, it gives players a chance to learn the heroes without having to learn item builds.

The map comes in two flavors; the single lane and the MOBA default three lane setup. Guardians of Middle-Earth’s map is smaller than most, making it easier for players to shift lanes for ganks, pushes, or to defend. This also changes the flow of the game, with each of the phases condensing in time. Laning time is decreased, and towers fall quickly to a full team push ultimately resulting with an average game time around 20 minutes. Again, a nice change from the usual 40-60 minute games usually seen in MOBAs.

My favorite part of the game has to be the characters, and the cast really sets Guardians apart from the other games of this style. The staples like Legolas, Gandalf, and Strider are present, but the fun comes from the unsung heroes of Middle Earth. The lesser known demi-humans, supporting characters and villains really fill out the roster and make for some interesting team combinations. Why wouldn’t Bilbo run with Bert the Troll while the Mouth of Sauron is healed by Galadriel?

It’s obvious the Guardians of Middle-Earth isn’t going to contend the top MOBAs such as DOTA 2 or League of Legends, but it does have a place in the genre. As I mentioned, it is a nice break from the bigger games with the lighter gameplay but the core mechanics are still there. This makes it a very good starting place for new players looking to get into the genre. MOBAs have a terrifying learning curve, and this turns away most of the curious players. For an intimidating genre, Guardians of Middle-Earth is a worthwhile title for both MOBA rookies or even Lord of the Rings fans that want to see their favorite characters in action. Having played a ton of Guardians on the console I was anxious to see how the game has improved. The console version was plagued at launch and the weeks after with connection and lag issues, which was a shame, because when you got a good match going GoME was a blast to play with friends.

The first thing I noticed with the PC version was a brand new interface clearly designed for the mouse and keyboard. There’s still the nifty features present like the ability to enter a match making search and then continue poking around the menus and customizing your belts and characters. Steam integration is done fairly well, though it would have been nice to limit the party possibilities to those that actually have or are in the game.

Once in game the mouse and keyboard controls still work well enough. Special abilities are bound to keys and everything within the interface is clickable too. Still, for a more the more action oriented nature of this MOBA I found the gamepad works best.

There’s definitely a few issues to be had in the PC version too - we had some audio glitches and some problems with the controls in terms of things not happening quite like we expected them to. For instance sometimes we saw our character retreat after every mouse click. In terms of co-op play the bots seem to do a decent enough job as competitors and the game will fill in any missing slots on your team with AI folks as well. co-op play will earn you experience and unlocks as well when chosen from the matchmaking options, something that doesn’t exist in other MOBAs.

The downside we found to matchmaking? Even though this is a recent release the matchmaking can take a while and several times we couldn’t even fill up our team. So if you’re going to want to run with a full house quickly better find five friends.

The game also has a serious amount of DLC, mostly in the form of skin packs. At launch there was almost $70 of content to purchase. Luckily, for the most part, all the characters in the game itself can be unlocked just by playing and earning credits.

Overall the PC version of Guardians of Middle-Earth is a solid port of the original and a nice distraction from some of the more hardcore MOBAs out there.