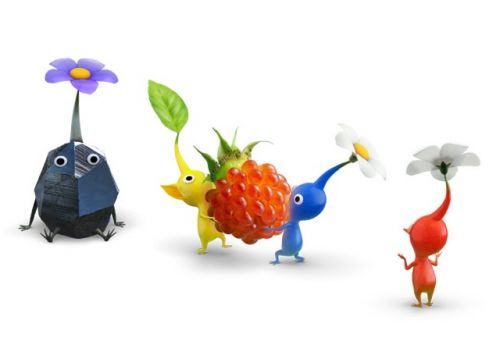 The announcement of Pikmin 3 at E3 was one game we couldn’t wait to learn more about. With the Wii U just months away from release, we wanted to grab as much info on Nintendo’s next-gen, co-op titles as possible. From the big Nintendo cheese himself, Shigeru Miyamoto, we got the inside scoop on Pikmin 3's co-op capabilities.

Miyamoto was the sole creator of Nintendo’s flagship series’, such as Super Mario Bros. and The Legend of Zelda. But one series that most people probably don’t mention in his portfolio is Pikmin, a game he envisioned from observing his backyard garden. Since then, he’s release 2 installments in the series, with the 3rd on its way. With all of the new features the Wii U will present to us, will Pikmin 3 boast any co-op play like in Pikmin 2? Will we be able to take control of both Olimar and Louie this time around online? An IGN interview with Miyamoto answered our question clearly:

IGN: One of the things I think Pikmin 2 really drove home was the element of cooperative gameplay, and just multiplayer in general, allowing more than one player to play together. Can people expect the same from Pikmin 3? Perhaps even online Pikmin?

Miyamoto: Everyone asks that question! [laughter]

So in the case of Mario Kart, we did have online multiplayer, and that's something that... You have to be very careful that you don't drop frames as you're trying to sync up with other players over what could be a very great physical distance, over the internet. But in the situation of Pikmin, for example, since you would have lots of individual, small creatures, the Pikmin, whose every movement and location is going to be really important in the game, it would be very difficult to sync up over an internet connection.

Yep, no online multiplayer for Pikmin 3. Bummer. Still, we know that we’ll have a great couch co-op lined up for us once the Wii U is released come this holiday season. In the Pikmin 3 showing, he also showed off 4 new "captain" characters that were neither Olimar or Louie, making everyone scratch their heads as to whether or not this game will include 2-player or possibly 4-player co-op modes. With the Wii U's new controller, anything seems possible at this point:

Be sure to check out the link below to learn what else Miyamoto had to say about Pikmin 3's future gameplay.