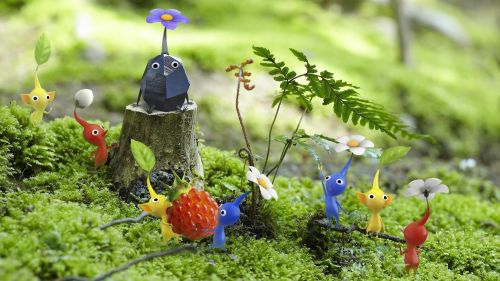 Though Nintendo was shooting for Pikmin 3 before the end of 2012, it looks like it will just make the cutoff of the Wii U’s launch window next year.

The third installment of the Pikmin series, being one of the hallmark titles announced from Nintendo to be released within the Wii U launch window, will be pushed back to basically the end of said window. As of now, Pikmin 3 will release by the end March 2013.The news was subtly announced when Nintendo developers discussed the progress of the new Wii U features with Global Nintendo President, Satoru Iwata, in his Q&A feature, “Iwata Asks”:

Yamashita: For example, something with a lot of small characters appearing like Pikmin20 was surprisingly all right.

*Pikmin: The first game in the Pikmin series, released for the Nintendo GameCube system in October 2001. Pikmin 3 is scheduled for release for the Wii U console in the spring of 2013. The game was shown at E3 this past June and looked very promising as a Wii U launch title, even discussing its couch co-op features. Even though Nintendo has intended to keep their promise of releasing Pikmin 3 within the Wii U launch window, that window has been described as the time of the Wii U’s retail release (November 18th) until the end of March 31st, 2013.

If all goes according to plan, and no further delays are announced, Pikmin 3 will release on Tuesday, March 26th in the United States, with a three day delay for the United Kingdom, and just barely make that window.