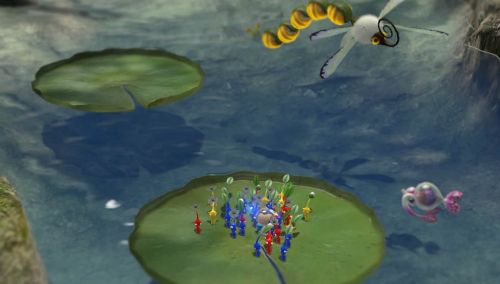 Some new footage of Nintendo’s upcoming Wii U Pikmin title, Pikmin 3, has surfaced on the internet, and we’re excited to show off some more of its co-op gameplay. From the looks of things, there will be a crap ton of new, giant monsters to encounter and defeat. Players have got to hand it to Nintendo to make Pikmin games look so natural in both their environments and alien life forms.

We sort of recall from the first Pikmin game that going out a night was an awfully dangerous thing to do. The creatures that roamed the mysterious alien planet were mainly nocturnal, so it was almost like committing suicide to stay on the surface; Olimar was to return to his spaceship to escape almost certain death. I guess Nintendo threw out that notion and decided to add almost pitch black areas, possibly a cave of some sort, for the Olimar-like characters to explore. In Pikmin 3, however, Olimar will not be featured in the game, including his co-op partner from Pikmin 2, Louie. Instead, we’ll be given four new Olimar-ish people to play as, swapping between each of them during single player or co-op gameplay. No new information has be revealed on these new Pikmin-plucking adventurers so far.

Although we don’t know the official date yet, we do know that Pikmin 3 will release on the Wii U sometime in the spring of 2013. We can’t wait to see how it plays out ourselves!