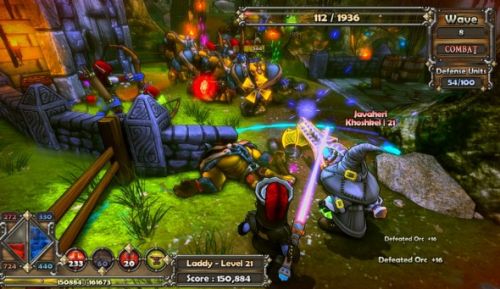 Recently, Trendy Entertainment has announced its cancellation of Dungeon Defenders for the PlayStation Vita. While we are slightly disappointed by this, Trendy does have other plans already in the works that involve cross-platform gaming.

With the end of the end of the 2nd quarter, Trendy has chosen to focus its time and energy on creating a new, currently unannounced game instead on finishing the Vita version of Dungeon Defenders. Before getting peeved at the decision, read on to hear Trendy’s explanation on it their website:

We originally showed off a tech demo of Dungeon Defenders running on Sony's handheld early last year… E3 came and went, and our fans noticed that nothing was said about Dungeon Defenders for the Vita. While we believe the Vita is a very capable platform, we've decided to shelve the Vita port of the game. Many fans, including myself, would like to play Dungeon Defenders on the portable device, but ultimately, we've decided to divert those resources to other pursuits. We can't talk about these at the moment… In fact, you may not hear about these for quite some time. But trust us when we say it'll be worth the wait.

It’s a shame we won’t have the title on our Vitas, true enough, but what we were extremely curious about Dungeon Defenders Vita was how it was going to allow cross-platform features, allowing us to play conjointly with the PS3 (Vitas were going to be able to link up directly to the PS3), PC, iOS, and Android editions. Trendy has already showcased a PlayStation 3 playing against a Tegra 2 mobile phone with Dungeon Defenders earlier this year, now planning to switch platforms to the PlayStation Vita gaming handheld.

"All they need to add is the ability to save your status in the cloud so you can pick up and play on another device and they're done. That's not a hard problem to solve and I suspect Sony will offer a good solution for that via PSN at some point,” said Epic founder, Tim Sweeney.

As more games are announced, and people stay glued to their cellphones and mobile devices, we can only hope that more companies will make cross-platform gaming more of a priority.