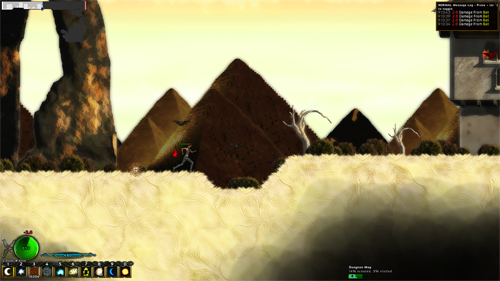 Arcen Games, the masterminds behind A Valley Without Wind have been tweaking the game since April 25th, taking all of the data and feeback that players have been giving them. They have officially released patch 1.1 which changes many things in the game and adds tons of new content, giving you a reason to hop back into the world of Environ.

If you have not heard of A Valley Without Wind, take a moment to read our co-op review of this very unique game. It can only be described as 'genre shattering' and adheres to no specific gameplay styles. The closest resemblence is if someone tried to make a Super Nintendo game in the year 2012. If you are invested in the game you can check out the long list of patch notes, but Arcen has also provided a lengthly reflection on the transformation process from 1.0 to 1.1 which can be found here.

Christopher Park, designer of A Valley Without Wind summarises:

I believe that 1.1 succeeds at this far better than 1.0 did, to the point that they are almost different games no matter how similar they may look at first glance.  On the other hand I also believe that our work is not nearly done if the world of Environ is to reach its utmost potential.  Slow and steady wins the race, and -- players willing -- we at Arcen intend to be adding onto this game for years to come.

The most notable changes come in the form of player interaction and making it easier to build both your character and the world itself. Arcen has added over 160 new room maps, 37 new enemies, new music, spells, missions, and overall functionality. We could list off all the changes for you, but trust us when we say that it is better to go and experience them for yourself.

A Valley Without Wind is available on STEAM for $14.99.