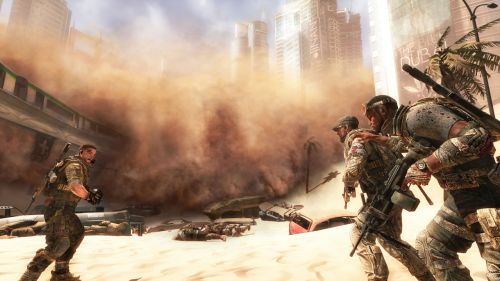 I was excited when I saw there were five new games coming out this week. The summer can be a little sparse when it comes to new releases. Then I was sad when I realized all but one are re-releases or system ports. Then I was happy  because Dead Island is an awesome co-op game and everyone should play it. Then I was sad again, for no reason. I need to change my meds.

Dead Island: Game of the Year Edition (360, PS3) Dead Island is a great open world zombie game which gets even better with friends. If you like chopping and smashing various zombie parts, this is the game for you. Here's a link to our Co-Op Review. 4 player online co-op

LittleBigPlanet (VITA) It's cute and tiny! Build stuff and share it. Oh look, here's a link to our PS3 Co-Op Review. (The Vita version will include new adventures and Vita-specific features) 4 player online co-op

Resident Evil Chronicles HD Collection (PSN) On-rails shooting, anyone? It's like Resident Evil from a few years ago, without the pesky movement.  2 player local co-op

Spec Ops: The Line (PS3,360,PC) Ah, here we go. A new game! But what's this? It will NOT include co-op until a later date. Co-Op will be added through free DLC that should launch "around" release. Whatever that means. 2 player online co-op available through future free DLC

The following games will be available from Amazon this week. Please use the links and help support Co-Optimus! And as always, if I missed something, feel free to note it in the comments section.