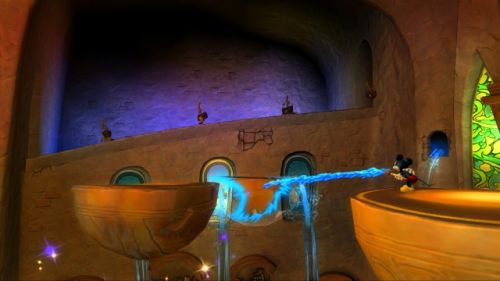 Warren Spector is one of the most revered designers in the gaming industry today.  With such titles as System Shock, Wing Commander and Deus Ex in his portfolio, it's difficult to imagine that a simple platformer like Epic Mickey 2: The Power of Two could prove to be a challenge.  To understand the challenge, you need to understand the basic concepts of the game.  At its core, Epic Mickey 2 is about creation or destruction - do I paint the world to create, or use thinner to destroy things in my path.

It may sound simplistic, but the puzzles are actually quite complex.  To design this, Spector credits his previous work with inspiration for Epic Mickey.

If you set off every alarm [in Deus Ex], that's going to attract the attention of a lot of guards, which means you're going to get in to a lot of fights. So if you want to get into fights, just show yourself and set off alarms.  It's just like Deus Ex. You apply a little logic, and after a while you sort of learn the rules of the world and the game

Of course knowing the rules doesn't make the game easy.  After all, it's the challenge of games that make them addictive for most.  But there is also the frustration factor and its here, in this realization, that shows Warren Spector knows a thing or two about designing games.

In most games, like if you're playing a shooter, and you're just not good enough, your option is to stop playing.  If you're playing a stealth game, and you're not good enough to pass a guard, your option is to stop playing. In this game, as in Deus Ex, as in several other games I've worked on, if something is too hard for you, don't beat your head against the wall. Stop, think, look at the situation and try for something else. I tell the designers all the time. Despite Epic Mickey 2 being touted as a "videogame music" - the actual music parts of the game are only played out during cut scenes.  The reason behind this?  Despite all of his experience, Spector couldn't find a way to make the musical gameplay elements meaningful and fun.

Even without that reluctance on Disney's part, though, Spector admits that he's not 100 percent sure he knows how he'd implement the musical gameplay he has in his head.

The other thing that stumped him...but he made it anyway?  Co-Op.

He also said that adding co-operative multiplayer to what is only the second third-person game of his career was enough of a design challenge for one game without adding a totally new musical mechanic as well.

So in this case, co-op won over music.

Epic Mickey 2: The Power of Two is out later this year on the Xbox 360, PlayStation 3 and Nintendo Wii with two player local co-op.