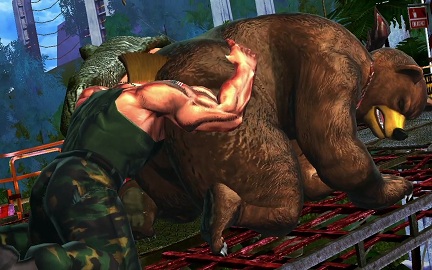 Building one's rage has been an important part of fighting games for decades.  Be it the old school throwing of the control pad after you lose, or the more modern take of an in game rage bar allowing you to unlock special moves.  In a pique of genius, Capcom have combined both inner and outer game rage by charging $20 to unlock 12 characters for Street Fighter X Tekken already housed on the disc.

In the grand scheme of things, unlocking DLC from a disc is not much worse than downloading a tiny file for the same price.  However, at $20 for PS3 owners and 1600 Microsoft Points for 360 owners, the cost seems pretty steep for these 12 characters:

The ODLC (On Disc Loadable Content) will be made available on 31st July to coincide with some tweaks that Capcom is giving the game:

-Ryu, Ken and Akuma's Tatsumaki Sempuu kyaku have all had their hitboxes reduced in size

-Auto-block gem has been re-balanced

The 12 characters will be free to Vita owners when the game is launched on that platform.  Capcom are well aware that the on disc nature of the 'DLC' has proved controversial and they make note of it on their forums:

I know the 12 DLC characters have been a contentious topic since they were discovered on the disc, but your reactions have been heard. We can cite our reasons why they were on the disc all day - compatibility for all players, save HD space, download bandwidth etc. - but in the end you have to hear what the community has to say. The dev teams are listening, and promise to incorporate that feedback into future titles - fighting or otherwise.

Basically it sounds like they are saying the next game they produce will have overpriced content for download only, rather than than being on the disc.

Street Fighter X Tekken has 2 player local co-op that allows you to tag a partner as you fight through the campaign.  Having played it with a pal there is something to be said about a farting bear working in co-operation with an oversized pink wrester.  When you have that dynamic duo, I'm not sure I need another 12 characters to play with.