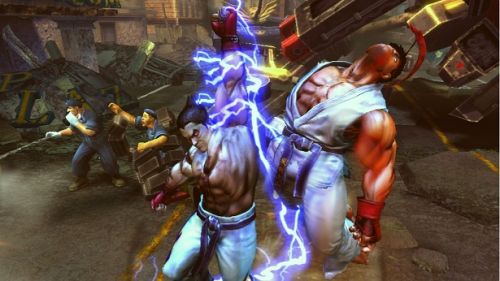 I remember an age when you bought a fighting game and that was it.  Our online world has given developers the opportunity to tweak a title after release to their heart's content.  Some would suggest that releasing a broken game in the first place is a bad thing to do.  We don't mind so much as long as any updates are free, as in the case with Street Fighter X Tekken ver. 2013.  This version aims to make the game faster to play and easier to see.

Street Fighter X Tekken offers local 2 player co-op for players looking to take on the campaign as a team, but it also offers some sluggish gameplay that Capcom are aiming to deal with.  Ver. 2013 offers the following:

Standard throws are faster, and now have a 5F start-up, rather than the 7F start-up in previous versions.

Anti-air techniques for Tekken characters have been improved.

Recoverable health regenerates at a slower rater, reducing the number of timeouts.

The cinematic camera during Boost Combos has been changed, giving battles a speedier feel.

The visual effect while Gems are active has been changed.

The “Fight” message at the start of each round disappears faster.

As well as systems changes, some of the characters have been changed slightly to balance the gameplay:

Kazuya: ’EX Wind God Fist’ now has full invincibility from the start-up to the end of active frames.

Hopefully these changes will be enough to keep Capcom satisfied with the game until Ver. 2014 is needed.