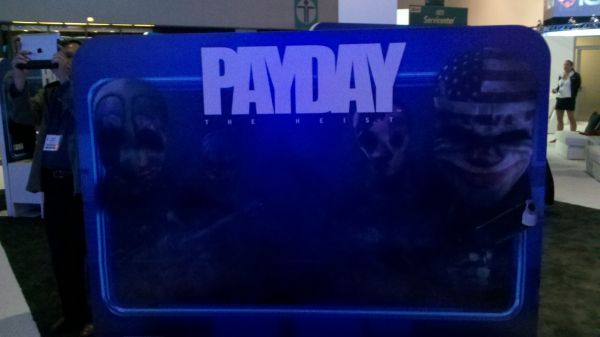 About a week before E3 I was going over my scheduled appointments and realized I had a meeting with Sony Online Entertainment on day three.  I was wondering what I was going to see on the co-op front, other than maybe a few updates for DC Universe Online.  Then I checked my inbox and saw this message from Nick; "When you meet with SOE you need to try to see/play this." He had posted a link to the PlayStation Blog.  I glanced at a newly announced game called PAYDAY: The Heist. I took a little note, responded back with something like, "Looks cool. Kind of a Kane and Lynch multiplayer vibe," and immediately put it on the back burner.  I've never been too much into crime games, and shooting cops and taking hostages isn't my cup of tea.

I had walked by the SOE area several times at E3.  They had a few guys in suits who were wearing masks, just like the criminals in the game.  It looked as if they had drawn a pretty good crowd for much of the show.  On the last day of E3 I finally got a chance to sit down with Simon Viklund, Sound Designer for Overkill Software, the developers of Payday.  He was one of the guys in the suits.  All of the Overkill studio members were decked out as characters in the game.  As I would soon find out, some of them were actually in the game.  Simon handed me a controller and joined me for a heist.  I didn't know then, but I was about to play one of the best co-op games at E3.

Payday: The Heist is a four player, first person, co-op game.  It's online only, sorry, local co-op fans.  The game features drop-in/drop-out co-op.  AI will take the place of your three partners in crime if you want to go it alone.  You'll team up with three buddies to pull off different robberies.  Think of the episodic nature of Left 4 Dead meets the progression system of Call of Duty meets the setting of Heat.  Simon and I were going to attempt a bank heist.

We were presented with a class selection screen.  Yes, this is a class-based game with a character progression system.  You can choose between assault, support, and sharpshooter classes.   Each class has its own rewards.  You could play as the assault class and try to unlock a new weapon, or you could change to a support class and try to earn extra ammo.  XP was objective based, so while kills do count, they're not the priority.  You can even change between classes on the fly during the middle of a job.  Simply hit the back button and you can switch from support class to sharpshooter.  Your objectives and potential rewards will change as well.

As the game loaded we were treated to news reports of a daring midday robbery.  The broadcaster seemed to be describing exactly what we were about to attempt.  Sure enough, we cut to a title which read "Earlier that day..."  The game then faded to the front steps of the bank, where my cohorts and I were standing, trying to look casual.  The presentation instantly gave the game a cinematic quality.

I noticed that none of us had masks on.  Simon pointed out that the criminals were, in fact, the developers themselves.  They had mapped their faces to the characters.  It was pretty damn cool seeing the characters in-game standing behind us watching us play.  I was about to hit the ready button, which would have made me put on my mask and draw my weapon.

Simon told me to hold off.  He suggested that we case the bank, first.  If you don't ready-up you can walk around most of the bank level as a civilian.  Since our first objective was to find the bank manager, we simply found his location before we donned our masks.  That way we could avoid fighting our way through armed bank security.  After we found him we readied-up, and chaos ensued.

Once again, I thought of cinema bank jobs as we all drew our weapons and put on our masks.  Armed guards opened fire on us as I pointed my assault rifle at the bank manager and ordered him to the floor with the push of a button.  Simon covered me while I zip-tied the manager's hands.  Our AI buddies were no where to be seen, but I could hear gunfire, so I assumed they were taking out more guards.  After I had the bank manager under control things got hard to follow, and not because of any fault of the game, it was due to the fact that a crap-ton of stuff started happening at once.   And all of it was good.

Simon and I headed to the cage where we had to set up a drill.  By now a wave of SWAT team personnel was assaulting the front lobby of the bank.   Civilians were running around, bullets were flying, and smoke bombs were going off.  I was firing into the smoke as I crossed the way-to-large lobby.  With a tap of the L1 button my character screamed for the civvies to hit the deck, he even gestured for them to get down with his non-weapon hand.  Simon informed me that the same button would call out heavy troopers, highlighting them in a red silhouette so the rest of the team could see them. Calling out a shielded trooper to the team.

In all the confusion I shot the first thing that came around a corner.  Simon sounded genuinely upset; "That was a civilian.  Don't shoot them!  When you do it adds more time to the assault wave, and they're basically our extra lives."  Whoops.  Okay.  Big penalty for shooting normal people.  Got it.

Once we got to the drill the initial assault wave was over.  I think it lasted less than a few minutes but it was intense.  We got the drill going and prepared to defend the area.  The AI members of the team took up firing positions like pros.  Luckily for them, there's no friendly fire, because I was kind of shooting at everything.  Another wave of officers was imminent, and more objectives popped up on screen.  Simon explained to me that we could order civilians to the floor and zip-tie their hands.  If one of our team got capture on incapacitated we would loose that hostage.  I asked if we could just zip-tie everybody, since there were still a lot of people running around.  He informed me that I already used mine up on the bank manager.  Limited zip ties, limited lives.  Damn.

We continued through the bank heist.  We held off waves of troopers who wore heavier armor, repelled from skylights, utilized riot shields, and even tazed us.  After our success guarding the drill, we had to wipe camera memories, use thermite to burn into the vault, bag up money, and place C4 to blow open an escape route.  All of this required teamwork and cooperation between the four of us.  I'll mention it again:  Payday: The Heist feels like playing a big-budget Hollywood action movie.

Each job will play out in its own episodic way, like Left 4 Dead.  Except here your foes have guns, and there's a robust character progression system to keep you coming back for more.  All of your money and XP will be attached to your profile.  I wasn't expecting much from Payday, but after pulling my first bank job I'm eager to go back for more.  The game should be available on PC and the PSN later this year.