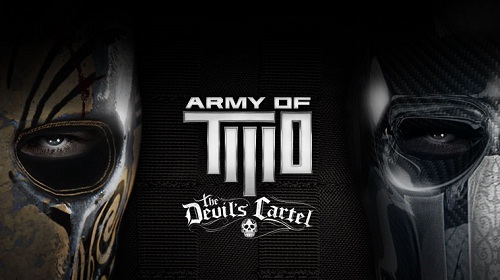 Army of Two is back with a vengeance. EA and Visceral entertainment just announced Army of Two: The Devil's Cartel. This will be the third installment of the cooperative third person shooter franchise. The game will be set in Mexico, in the middle of a vicious drug war. Salem and Rios are out, Alpha and Bravo are in. Players will still be working for Tactical Worldwide Operations as private military contractors (I like to think of them as "bro-cenaries" or "merc-bros"). My blood money says we can expect to see Salem and Rios, the bro-iest of bro-op buddies, appear as NPCs.

What is Army of Two known for? I'm thinking of funky masks, blingy guns, and cooperative door opening/wall climbing. The Devil's Cartel will have all that -and more! Visceral Games Executive Producer, Julian Beak mentions "explosive new tag-team features," which sound interesting. I hope they're more than simply boosting your partner up to another level and fist bumps. There will be deeper character customization and upgrade options. Good. I want a diamond-encrusted tiara on my mask and my M134.

Players will be dropped into the middle of Mexico's drug war, which is not a good place to be. As usual, everything goes to hell and then it's clobberin' time. And by "clobbern' time," I mean a "face-shooting fiesta." EA promises "a more intense, mature and grittier tone." Excellent. I want to play a game based on Clint Eastwood's face.

There was no mention of the Aggro system, which I quite enjoyed from the first two games. That doesn't mean it's gone, but that was one of the main dynamic features of the previous titles. Curious that it's missing in the press release. This edition of AoT sounds like it will be more tactical. I can dig it, but the bacon wrapped hammy cheesy-ness of the first two games gave the franchise a little personality. Hopefully it will still have its own identity, and not simply become: "Third Person Military Shooter 2013 Winter Edition." If  you want to know more about Army of Two: The Devil's Cartel, check out Game Informer. They have a big preview coming out in their September issue, which has also been dubbed "The Co-Op Issue." Cool. Everyone needs more co-op, even frozen Minnesotans.

There was a rumor this past March of an "Army of Four" title in development. We assume this is the same game. 2010's Army of Two: The 40th Day had a four player co-op mode. Will there be more than two player co-op in this The Devil's Cartel? We'll just have to wait and see.

Army of Two: The Devil's Cartel supports two player local co-op and two player online co-op. We can expect it to hit store shelves next March. It will be available on the Xbox 360 and Playstation 3.