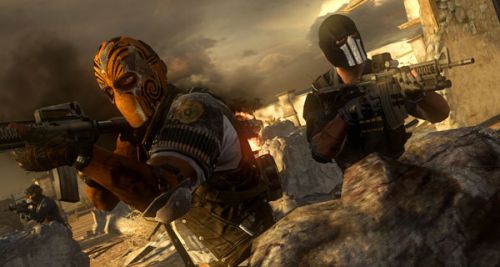 A new Army of Two: Devil’s Cartel co-op trailer has been revealed, showing off gameplay from the first level of the game and much needed teamwork to survive in this sequel intact.

If you can get past the generic commentating from the pro skaters at the beginning and focus on the gameplay later on, you’ll see a very worthwhile couch co-op title to look forward to. From what these guys are saying, flanking the enemy seems to be needed now more than ever in Devil’s Cartel, along with melee kills. By working as a team, both player can build their “Overkill Meters” that briefly give the team unlimited ammo and slow-motion, gunfire action for a short amount of time. With the seemingly large amount of baddies to shoot at in this game, you’re going to need it. See for yourself what we’re talking about below:

At the end of the video, the contents of the “Overkill Edition” for Devil’s Cartel are also revealed: “TAH-9 Kit”, “Overkill Kit”, “Day of the Dead Kit”, and a special “Overkillers Contract” add-on. Grab a little extra content right from the get-go by preordering the game early, as game arrives in stores March 26th on Xbox 360 and PlayStation 3.