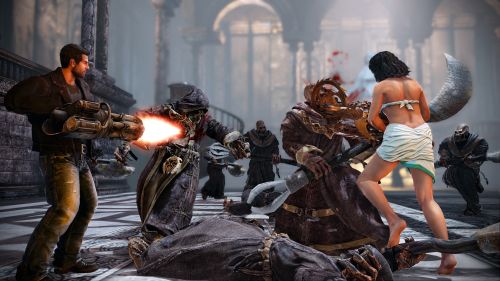 The Farm 51's Painkiller reboot, Painkiller: Hell and Damnation, needs beta testers. The over-the-top first person shooter of the hellpocalypse requires your mad gaming skillz. Join protagonist Daniel Garner, who I'll simply refer to as "Painkiller," and his barefoot lady friend as they destroy the minions of hell with an assortment of diabolical weaponry.

If you want to get in on the gory action you can sign up for a beta key here. You'll get access to the single player campaign, network co-op, deathmatch, and team deathmatch. The devs are looking for feedback and value your expert opinion. Seriously. There's a "Feedback" button that links directly to the forums.

The beta will run through launch. According to Google's translation of The Farm 51's website, "completion of works is planned for autumn 2012." We don't have a player count on co-op yet, but we figure the game will offer a co-op campaign for at least two players. That's just speculation. If you get into the beta feel free to update us on any and all of the co-op details in the comments section.