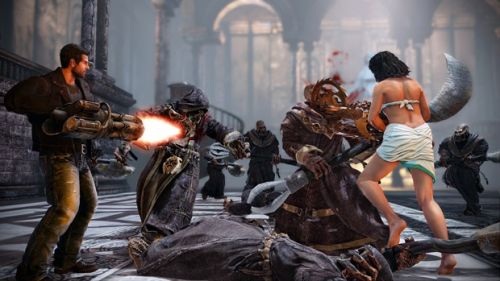 In old patch news: Painkiller: Hell and Damnation was patched earlier this month. There were a few nice fixes for the co-op mode. It pales in comparison to the 2100 word patch notes for Assassin's Creed 3, but it should resolve quite a few issues.

Some of the fixes are directly related to co-op. Now the game should save progress for both players when they're in a co-op match, and inactive co-op sessions have been removed from the game list. They've also increased bandwidth for multiplayer games. You can see a full list after the break.

- fixed: It’s possible to unlock the “Evil’s Haste” achievement without destroying every object at tutorial level
- fixed: Local Co-op Save games are not made for any of the players when advancing in Local Co-op mode
- fixed: demon mode erratic weapon switching
- fixed: tarot cards do not have proper textures
- fixed possible hangouts when game is being closed.
- CTF flag statistics are now correctly updated on leaderboards
- tutorial messages fit on screen in 1024x768
- increased game stability
- proper game filtering in server browser
- increased network bandwidth for multilayer games
- inactive coop game sessions are removed from game list
- MP: updating server info duirng match is implemented
- MP: Waiting time after next round will be much shorter when a round is over
- added console command for changing fov (ex, Fov 120 )

Painkiller: Hell and Damnation is out now on PC. It supports two player local and online co-op.