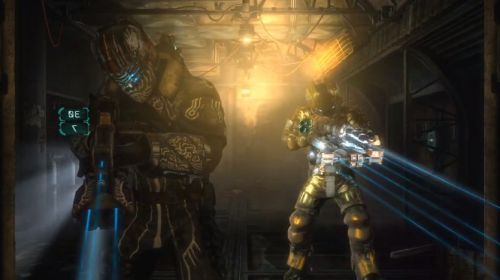 Dead Space 3 is still about four months away from launch, but yhat's not going to stop EA and Visceral Games from promoting it. New pre-order bonuses have been announced for Isaac Clarke and his new BFF, John Carver. If you pre-order Dead Space 3 you'll automatically be upgraded to the Limited Edition. This will grant you access to two new suits and two extra weapons.

You can see the Witness suit, the First Contact suit, the Evangelizer, and the Negotiator in the following gameplay video. It's basically two sets of badass looking armor coupled with a pair of shooty things with frick'n laser sights attached to them. I mean, just look at that one on the right. I count six beams. I think I know where it's going to shoot. Oh, and the Necromorphs are still terrifying. Enjoy.

Dead Space 3 will support two player online co-op, a first for the series. It will be available for the Xbox 360, PlayStation 3, and PC on February 5th next year.