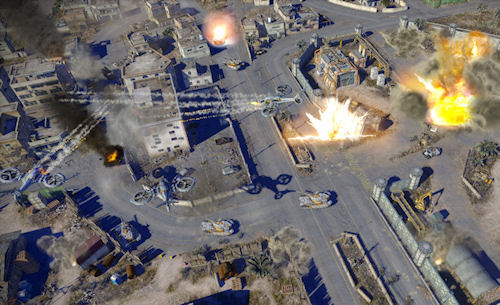 EA have announced that Command and Conquer Generals 2 has gone from a full fledged retail title to a Free to Play game powered by the Frostbite 2 engine, the same engine that powers Battlefield 3.  The game is being developed by new Bioware studio, Bioware Victory.  In an interview with PC Gamer, the game's producer said that the new title will be without a single player campaign, and instead focus on competitive and cooperative skirmishes.

Obviously with any free to play title, the question is, what will I be charged for?  As of now the studio is only stating that new maps will be premium DLC.  Players who join up for online battles will have a persistent account that will track levels and progress and allow you to team up with other Generals.  Moving forward as more C&C games are added, your account will span multiple titles.

Check out the impressive announcement trailer below to see the Frostbite 2 tech in action.  While it seems the core C&C community is pretty upset by this, the idea of a premium game like this available for free is very tempting.  The game is slated to hit sometime next year exclusively on the PC, and most likely, via EA's Origin service.