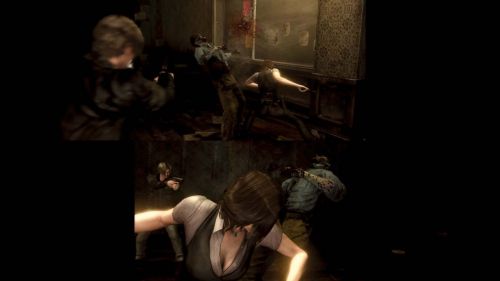 We've just got our hands on a couple of screenshots from the Japanese version of Resident Evil 6, courtesy of website Andriasang.  The screens showcase the game's interface as well as the split-screen setup for the survival horror title.

Returning from Resident Evil 5 is the staggered 16:9 box setup, maintaining the game's correct aspect ratio but also leaving some unused portion of your screen.  I personally prefer this setup rather than limiting a person's perspective,  but I do like when developers utilize the extra space and put HUD elements there.  It's unclear whether Capcom has done that from these screens, as it looks like most of the HUD exists within the game world itself.