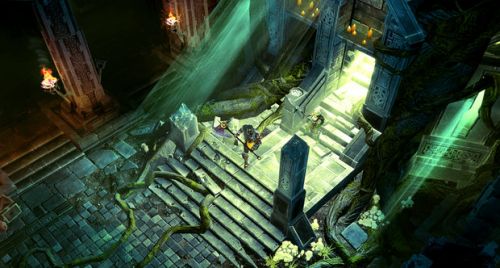 We have a good chunk of information about two upcoming titles we can’t wait to sink our teeth into: Sacred 3 and Dead Island Riptide. Our friends over at Deep Silver have given us a lot to talk about in this relatively slow news week we’ve been having.

It shouldn’t be a surprise that a relatively unknown publisher, Deep Silver, will be pumping out some great stuff after recently helping to create some amazing co-op titles, such as in the mystical Sacred series and the spine-chilling Dead Island. Obviously, we wanted to know more about what they have in store for us next year, so Deep Silver gave us a lot of exclusive info on their next two games, both of which have massive co-op potential included.

The next installment in the popular Sacred series, the Action RPG title, Sacred 3, is set to continue in the rich and detailed world previously established. Deep Silver went into the background for the upcoming game:

They say that whoever possesses the Heart of Ancaria will decide the fate of the world. Zane Ashen, ruler of the corrupt Ashen Empire, will do everything in his power to obtain the Heart; however, the Seraphim have hidden it away in a secure and secret place. Only when a group of heroes combine their powers to oppose Zane Ashen’s reign of terror does the world have a chance of escaping utter destruction.

The epic fight against Zane is set in a colorful and varied game world with rich mythology and diverse regions and climates. Many of the environments will be familiar from previous Sacred games, such as Castle Braverock, which now lies in ruins. Impressive bosses await the heroes along their journey – and fabled treasures, honor and experience are the reward for overcoming them!

In this next installment, up to four players can choose team together to do battle against the evil Ashen Empire within a gripping co-op mode. They will fight both the Imperial armies as well as between each other in a friendly, competitive rivalry, adding a new element to the franchise that should make for a nice change to the overall gameplay experience for all players. Several classes of characters will be available for players to choose from, such as the Ancarian Lancer and the Safiri Warrior, each offering a specific set of skills for players to master. Choosing the appropriate perks and character equipment is crucial to the success and survival of both yourself and your team. If you’d like to play the prelude to the main story told in Sacred 3, Sacred Citadel, a side scrolling action brawler developed under Southend Interactive, will be available for download next year on the PlayStation Network, Xbox LIVE Arcade, Steam, and other electronic partnerships.

Sacred 3 is currently being developed for the PlayStation 3, Xbox 360, and PC platforms. Having survived the ordeals of the zombie infestation on the once beautiful island resort of Banoi, our group of survivors thought they had finally found a safe place to escape from this terrifying nightmare. But they were wrong. Shortly after the battle-hardened team had landed their helicopter on a military ship, a furious storm hits and havoc quickly spreads on board. Suddenly they find themselves struggling for their lives again with all hope drowning in the rising waves. A monsoon has hit the once beautiful archipelago and heavy rainstorms have laid waste to large areas of the islands. The city of Henderson and jungle areas on the island of Palanai were flooded leaving boats as the only remaining way of transportation. Dynamic weather conditions will force the team members to adapt to changing visibility conditions.

Adding brand new, gameplay elements into the already successful blend of zombie action horror, Dead Island Riptide will most certainly up the level of zombie apocalypse from the original title. Arguably one of the most significant bits of information is the addition of a fifth main character to join the original team, all decked out with a shiny new skillset apart from the bunch. In this game, teamwork will be much more important than ever before, because a terrifying, new zombie mutation has started springing up all over the island and it doesn't bode well for our protagonists. Along with the new survivor member, players will need to use fences, turrets, and various traps to help fight off the massive onslaughts of unusually aggressive zombies, aiming to destroy the human sanctuaries scattered across the island. Cooperation and team skills of the survivors will be put to the test and will constantly be pushed to the threshold. Luckily, those that look to have a more intense, but strategic gaming experience than from the previous title will be glad to know that a new communication feature will also be found in the co-op mode for your convenience.

Techland will be developing Dead Island Riptide, and hopes to release the game for the PlayStation 3, Xbox 360, and PC.

Both Sacred 3 and Dead Island Riptide look to have some interesting, invigoratingly new co-op elements we absolutely cannot wait to try out for ourselves. We predict that both of these games will be some of the best co-op games to come out of 2013.