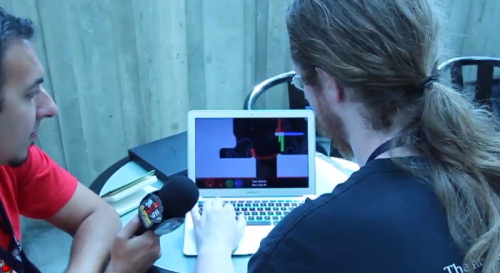 The Indie videogame scene absolutely exploded at PAX Prime 2012.  From the huge Indie Game Mega Booth that occupied a quarter of the hall to various devs going "door to door" showing off their latest game, PAX was a hot spot for indie developers.  One such game we saw was called Colour Bind.  No, that's not a typo.  The game is a gravity and physics puzzle game where players have to get from point A to point B by manipulating switches, jumping over obstacles, and maneuvering objects all while managing up to three directions of gravity.

The game ships with 50 levels in single player and 20 levels for split-screen co-op play, plus it'll ship with a level editor so players can make their own gravity defying levels. After getting the demo of the game at PAX I was able to get some hands on time with the latest beta build.  I was immediately reminded of N+ in terms of style, gameplay, and frustration.  Still, Colour Bind is one of those games that are immediately satisfying once you complete the puzzle, but the actual act of getting there can be an episode in patience.  The controls worked well, if a little sluggish, and the graphics are simple - yet effective.  Nice touches like particle effects on certain colored sections go a long way to contrast the simple black and white levels.  The music also carries gameplay as its procedurally generated based on the on screen action.

The biggest difference between a game like Colour Bind and N+ would be the pacing.  While N+ is incredibly fast paced, Colour Bind needs to be a slow and meticulous crawl - constantly referencing gravity directions and planning your path - almost like a level in Portal 2.

Colour Bind will be available on Steam on September 24th.