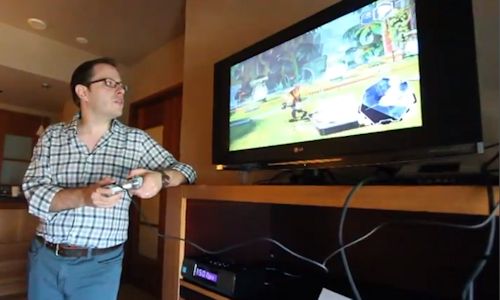 We went eyes on with Ratchet and Clank: Full Frontal Assault during PAX 2012 while members of Insomniac demoed some of the PS3 exclusive's features for us.  The game is the next in the Ratchet and Clank series but instead of doing a straight sequel, the team has decided to mix things up quite a bit by adding tower defense sections to the game as well as a full out versus multiplayer mode.

Ratchet and Clank: Full Frontal Assault is inspired by the hover boot sections of A Crack in Time combined with the siege mode that was present in Up Your Arsenal.  The team wanted to create the open world type feel as well as create that competitive match type feel.

The section of the game we were shown had Ratchet protecting a simple base that had two enemy lanes.  After going around and gathering the traditional nuts and bolts, you can then buy different types of defensive structures.  The base itself was pretty large, but there was one central point that needed defending.  After a wave of enemies Ratchet was able to go out and explore and search for weapons in a more traditional style of gameplay familiar to the platforming series.  These weapons were then used for each successive wave.

It honestly looked like pretty straightforward gameplay if you are familiar with the tower defense genre, players could do things like dismantle defensive structures and rebuild them elsewhere.  Obviously mixing in a second player for co-op would make things much more interesting and thankfully the game supports this online.

We also got a peak at the game's versus mode where players both have to attack and defend their bases from other players.  There's a lot of potential here, especially for some deep strategies of multiplayer combat.

Ratchet and Clank: Full Frontal Assault is coming to PlayStation 3 and Vita sometime in Q4 of this year.