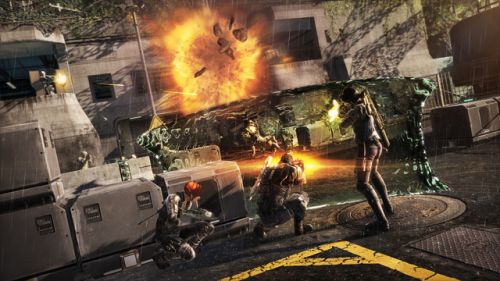 We recently told you how Insomniac's first multiplatform game, Overstrike, has now become a game called Fuse.  The title refers to a plot point about some alien goo that's since been weaponized by the government.  Unfortuantely that weapon gets stolen and it's up to the Overstrike 9 team to recover.  The renaming of the game was for a multitude of reasons, but one thing hasn't change, and that's a focus on co-op.

Let's talk about the changes the game has gone through first.  Most notably the graphical presentation has changed from a cartoony look to something a little more grounded in reality.  To go with that, the story and overall style of the game has also taken on a more serious tone, dropping some of the comedic relief we saw in the first trailer.

There's a new trailer out today that showcases the Fuse's four player co-op gameplay.  It's easy to see this is a class based co-op game with each character utilizing different weapons for different tactical purposes.  We've got our shielded character to provide cover, our ranged character to act as recon and sniper, as well as others filling in the standard roles.  Perhaps what's most surprising (or maybe least, given Insomniac's other titles) - are the incredible weaponary we have on display.

The game's co-op mode will allow players to earn XP, though its unclear right now exactly what you can use that experience for.   According to previews characters will also have special abilities, like healing, along with the insane weaponary - so our guess is you'll be able to buff up some of these.  All in all we sort of get a Borderlands Light vibe from this one.

Right now Fuse is set to release on Xbox 360 or PlayStation 3 next year with full four player online co-op support.