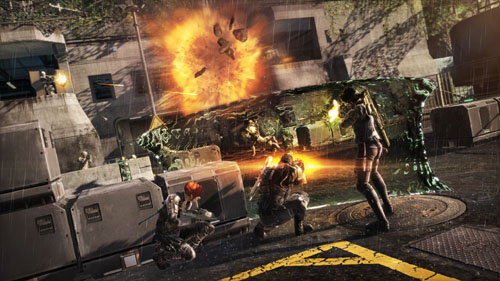 Today I attended the EA’s annual Naughty or Nice winter event, where they show off their upcoming games for the upcoming Winter and Spring quarters. The real highlight of the event for me was Fuse, the upcoming action/shooter game from developer Insomniac. If you’ll remember, Fuse is the new name for the game previously known as Overstrike, and earlier this fall it was announced that the game was receiving a rework. Since the information about Fuse has been pretty sparse, I was enthusiastic about the opportunity to learn more about the game and try it out firsthand.

Before I jumped into the game, I was given a brief rundown of the game’s backstory. The plot surrounds an alien substance, known as Fuse, which has been weaponized. Raven, a greedy corporation, has stolen it for their own devices and it’s up to a mercenary team (Overstrike 9) to nab it back from them. Overstrike 9 is composed of four squad members, each of whom have their own type of fuse tech weapons. Dalton is an ex-Raven operative, and he functions as the tank for the squad. He has the ability to project a large shield in front of him as he moves, which he and his team can shoot through while they are simultaneously protected by it. Naya is also ex-Raven (her father still works for them), and she is the squad’s assassin with the ability to cloak and shoot singularities at enemies. Izzy is the team hacker and can shoot bullets which crystallize enemies (other teammates can then easily shatter them into pieces!). Last, but not least, is former LAPD officer Jacob, the resident weapons expert. He adds fiery crossbow bolts into the mix. I played through the demo twice, once as Jacob and once as Izzy. The controls and movement instantly felt very fluid to me, even though it was still a pre-alpha build. Our guide demonstrated how one can perform an instant takedown on an enemy if he’s taken unawares. As a team, we took cover and flanked a medium group of Raven soldiers on the ground, while dodging turret shots from above. Then we concentrated on the guys in the turrets, taking them out with grenades. Dalton utilized his shield so we could more easily get into position for this. When an ally went down, I would immediately run over to resurrect them. I asked our leader what happened if someone bled out, and he informed me that we’d have to start the level over again. I approved, as I feel no one should have to watch their friends complete a level while they’re forced to sit idle.

When we were done with that room, we split into teams of two. Team one went up to blow open a door (it required two charges to be placed, so two people were needed). The other two went down to wait for the charges to go off. Once the doors were blasted open, we flanked any enemies inside the next room, and quickly took cover. When all the enemies there were dispatched, there was a blue circle upstairs which required all the players to group at to start the next event. Outside, enemies began dropping down to overwhelm us, but we coolly took them out utilizing turrets, a special fuse ability which made our shots consume no ammo, and comboing our special abilities (e.g. Izzy’s crystallizing gun and Naya’s singularities to shatter them). Killing enemies gives fuse points, which will later be used to upgrade your character in some way. I was told, however, that performing combos with teammates will net you more fuse points, which will surely encourage players to cooperate (something we always love to see around here). Once we had finished with the ambush event, we moved on to the next room. It was like a scene out of Mission Impossible: lasers everywhere! Izzy or Naya could shoot the security cameras with crystals or singularity to freeze them, and turn off their lasers for a little while. While the two cameras were “blind,” two people were able to sneak in and activate the panels we needed to progress.

Last, we were presented with a boss event. It was a huge mech who fired off nasty beams of energy which we had to avoid. He also had lassos he could shoot at people, which incapacitated them. This essentially left them vulnerable to the boss’ megashots, as they couldn’t do anything. If another team member is quick enough, though, he or she can run over and free their teammate from the lasso, saving them from going down. It wasn’t a super tough fight, but it was certainly fun. After we were done playing, we were filled in on some other details which we hadn’t been able to see in the demo. As we already knew, the game is playable with up to four players. If any less than four players are in a game, bots will fill in the remaining characters. The really cool thing about this is that Fuse supports a system they’ve entitled LEAP. If your game has any bots in it, any of the players can “leap” into them. Getting sick of playing Jacob? Play Dalton for a while, then! Really need Naya’s stealth ability for an event? No problem - just “leap” to her for a bit and utilize her skill. I utilized a very similar ability in Tales of Graces F, and I really liked being able to swap between characters on the fly.

The other, last bit of great news was that Fuse will support all sorts of co-op. 2-player splitscreen, 4-player online, and combo co-op (2-player split plus up to two more online) will all be supported on release.

Fuse is currently due out March 2013 on Xbox 360 and Playstation 3 with 4-player co-op. From what I’ve seen, I’m certainly looking forward to it.