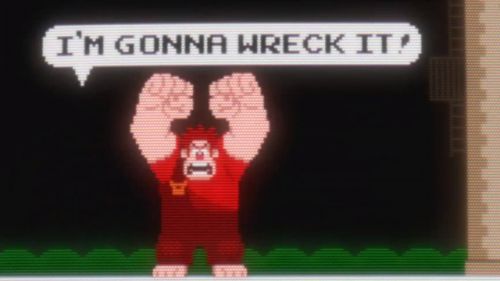 For those of you who wish a decent video game movie would be released in theaters for once, we might have a true winner with Disney’s Wreck-It Ralph. The movie’s official video game, however, is being described as the game that will “Inspire a whole new generation of young gamers”. Both Activision and Disney Interactive have been working on a side-scrolling, arcade title of Wreck-It Ralph: The Video Game for current Nintendo platforms to go right alongside what is portrayed in the movie. The story of the future Disney film features an old, 80’s style arcade game called Fix-It Felix Jr., that model’s itself off classic titles, such as Donkey Kong. In it, players are in control of the gentle, but enthusiastic handy-man, Felix, who fixes the windows that Ralph, the large, hill-billy type of character, destroys. The twist to the movie is that Ralph has grown tired of his life of “villainy” he’s been programmed to do over the last 30 years and suddenly quits to find a different video game to be the good guy for. Gamers who go to see the movie will quickly recognize the large amount of real-life video game characters we’ve come to love that will appear in the movie, such as Bowser from Super Mario Bros. and Clyde from Pacman.

To get gamers, or even non-gamers, into the big-screen movie, Activision and Disney want to recreate the games that are dreamed up and visualized during the movie into actual games for us to play, such as the racing game, “Sugar Rush”, or the FPS game, “Hero’s Duty” (Fix-It Felix Jr. is currently available on the iOS). In many of these games, both Ralph and Felix will work together to accomplish things the others couldn’t alone. Even the Call of Duty publisher will help to get the official Wreck-It Ralph video game for the Wii, 3DS, and DS released right alongside the feature length film. However, it has been confirmed that Wreck-It Ralph will only be releasing on Nintendo platforms, unfortunately. As a “story extension to the film”, players are given the mission to fight of a Cy-Bug invasion (whatever a Cy-Bug is, we’ll have to see the movie to know) by using Ralph’s massive strength to crush enemies, all while Felix does his “Fix-It” thing and repairs any and all damage dealt. The Wreck-It Ralph Wii version has a strong emphasis on co-op, having two players being able to switch back and forth between Ralph and Felix to clear puzzles and collect “Hero Medals”.

Video game movies and their official game title haven’t had the greatest track record in terms of success (and sanity) over the last 30 years. However, Disney hopes to change people’s opinions of the relationship between gaming and the big screen with Wreck-It Ralph. We hope that the relationship is definitely a mutual one at that.

Wreck-It Ralph the film will be arriving in theaters on November 2nd in Real 3D, along with its game versions in retail.