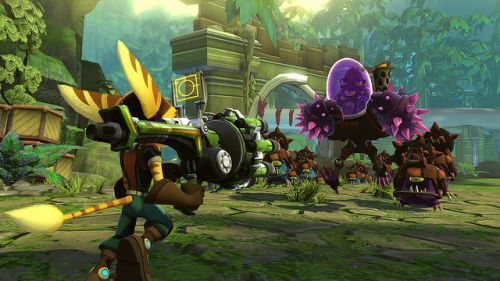 Insomniac have revealed their next Ratchet & Clank game, called Ratchet & Clank: Full Frontal Assault, it mixes the classic R&C formula with a hefty dose of tower defense.  You'll be building bases, defending bases, and fighting back waves of enemies with the usual dose of insanely powerful weapons at Ratchet and Clank's disposal.

The PSN title is set to be released later this year and will feature both local and online co-op play for two players.  More details on the title are set to be unveiled soon, but this definitely look like a unique twist to a classic franchise we'll have to watch.  There's no video footage available yet, but Insomniac have released a few screens.