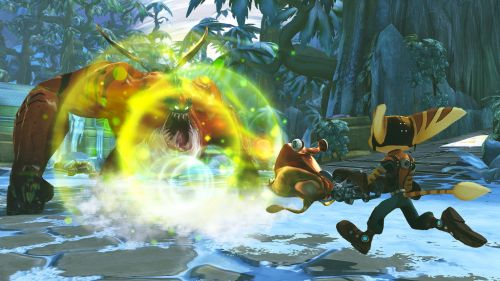 Ratchet and Clank: Full Frontal Assault has been planned as a downloadable Playstation 3 title ever since its announcement a few months back. Some people prefer physical copies to digital though, and Sony has taken their pleas into account. The game will now be coming to retail as a Blu-Ray disc as well as the PSN store. Even better, it supports cross-play and cross-save with the Vita, meaning you can buy it on PS3 and get the Vita version at no additional cost. Well-played, Sony.

The move to retail should bring a special smile to Trophy hunters' faces. That's because Full Frontal Assault will include a shiny Platinum Trophy in addition to the lesser-colored ones. Couple that with both split-screen and online co-op for 2-players and the game becomes quite a compelling purchase, if you ask me.