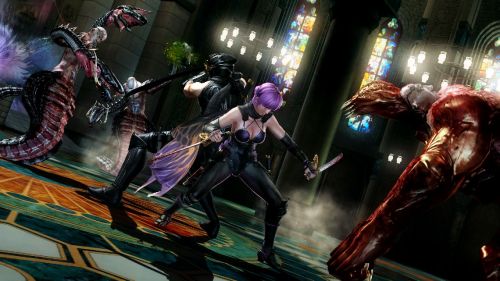 For the Wii U version only, Ninja Gaiden 3: Razor’s Edge will receive an upgraded game (you could count this as the “Sigma” version of the game). Not only will dismemberment visuals will be included back in the series, along with an improved AI of the enemy demons and ninjas you’ll encounter, the biggest feature going into it will be the addition of Ayane, a female ninja who’s skills are arguably on par with Ryu Hayabusa’s, as a playable character.

Ayane, boasting a moveset very similar to the one she portrayed in Ninja Gaiden 2 Sigma, will have playable chapters dedicated to only her in the game, and will be featured in the two-player online co-op mode. Ryu and Ayane, teamed up together, will be able to do twice the amount of slicing and dicing their way throughout the original story mode together, hopefully proving to be quite an impressive spectacle.  A separate feature called “Chapter Challenge Mode” will also give you playable access to either Ayane or Ryu in any chapter of the game, though it has not been confirmed to include co-op play. Check out the official Wii U trailer of Ninja Gaiden 3: Razor’s Edge below and understand why, within the first few moments, we got excited to see Ayane in full, badass ninja mode:

The Wii U Version of Ninja Gaiden 3: Razor’s Edge will be not be arriving in stores as a launch title, but will surface before the end of this year.