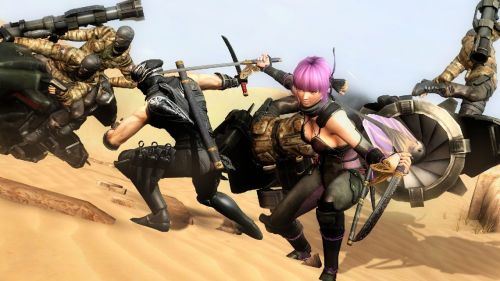 Ninja Gaiden 3 for the 360 and PS3 was... a bit of a let down - both from a single-player and cooperative perspective. There is some hope for improvement in the upcoming Ninja Gaiden 3: Razor's Edge for the Wii U, which seems to offer some improvements and additions over the original. One of the biggest additions is pictured above: Ayane as a playable character in both single-player campaign and the online co-op mode. A new list of features for the game has been revealed along with a release date - November 18, 2012, the Wii U's launch date.

The full list of features for Ninja Gaiden 3: Razor's Edge can be found below. While none of them include a full online co-op mode, or any specific mention of improving some of the problems we found with the original NG3, hopefully it will prove to be a true upgrade as opposed to a slight patching.

• Ayane as a playable character: In previous versions of the game, Ayane appeared only briefly in one cut scene. Now players can help her progress through her own exclusive chapters using a special set of weapons and Ninpo attacks.

• Ryu and Ayane playable in co-op mode: For the first time, players can use Ryu or Ayane to represent themselves in the game’s online co-op mode.

• Test of Valor battle areas: Each chapter includes a hidden battle area called Test of Valor. Upon finding hidden Crystal Skulls, players will be transported to these areas to face down waves of enemies and classic Ninja Gaiden boss characters with new moves.

• Wii U GamePad Functionality: Using the Wii U GamePad, players can easily change weapons or Ninpo attacks, and also quickly reference the button inputs required for various combo attacks without ever stopping the action.

• More Tenacious Enemies: The Wii U version of the game restores enemies’ ability to fight when severely wounded, requiring players to stay nimble with their battle strategies

With Ninja Gaiden 3: Razor's Edge now slated to arrive on launch day, there will be a total of 23 games available with the Wii U's release. It seems Nintendo isn't holding back any and will definitely try to get as many sales as possible on day one. Likely a good thing considering the reports of Nintendo selling the console at a loss.