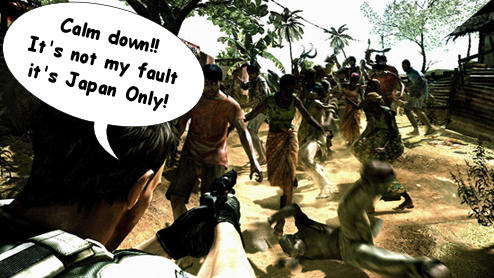 It's time to crack open the IP Spoofing tables and give uncle Charlie a call in Japan for his Xbox Live Gold Account credentials.  On December 5th, that's next week, Xbox Live Gold members in Japan will be getting an exclusive Resident Evil 5 demo that features co-op play.  Sorry PlayStation owners, your big black box is no good here.

According to IGN it's technically isn't not (I know...I know) confirmed that the demo will find it's way both world wide and/or to the PlayStation 3, but it appears right now only those in the land of the rising sun can lay waste to a different kind of zombie horde.