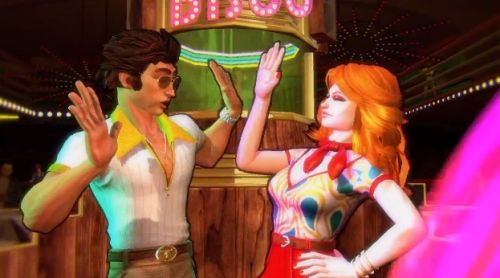 Dance Central 3 is dropping in a little less than two weeks. You may or may not know this, but there's an actual plot to this iteration of the dancing game. Was there a plot in the other two? Who cares. It's time to strap on your dancing shoes and fuel your flux capacitors. Yeah, that's right. There's a time travel hook in this story. Check out the videos and feel the beat.

The first video sets the mood. Is it just me, or does the DCI crew look like members of the Third Street Saints? Now that's a crossover I can get behind.

In the second video the developers break down each crew and explain what the heck is going on.

Finally, in this third video, one of those movie trailer guys does his movie-trailer-voice-thing to let you know that stuff is about to go down.

"First and last line of defense against dance crimes?" Glad they weren't around in my early college years. I'd be charged with crimes against humanity. It was bad. Really, really bad. Terrible, even.

Dance Central 3 features two player local co-op, but don't worry. If a bunch of your friends want to join in, I won't tell. I'll point and laugh and maybe take pictures, but I won't tell. Dance Central 3 is exclusive to the Xbox 360 and requires the Kinect sensor. It should hit store shelves on October 16th.