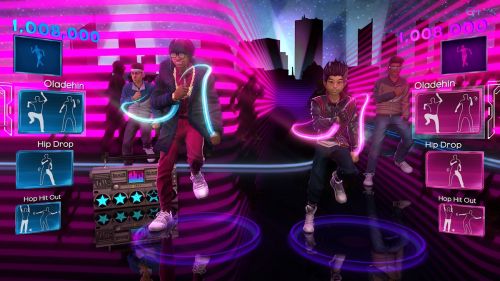 Last year, Dance Central 2 received a two-song playable demo shortly before the full game's release. This year it's happening again, as Dance Central 3 now has a an advance demo of its own. Clocking in at a larger 1.6 Gigabyte download this time, the new demo offers three danceable songs plus both competitive and cooperative multiplayer modes. Isn't it about time you put your Kinect to use once more?

On top of playing those songs in either standard solo or co-op play (Perform It! mode), the demo features Dance Central 3's brand new Party Time mode. Basically a hub for 1-8 players, Part Time allows one or more people to team up or compete in the various game types like Battle and Crew Throwdown. It should make Dance Central parties that much more awesome in the full game. Gold Xbox Live members can get the Demo here right now, while regular members will need to wait a week.

Dance Central 3 will include over 40 songs on disc when it launches in two weeks - here's a partial list. Songs from Dance Central 1 and 2 can be exported for use in part 3 as well - for a fee. On top of that, three retailers are offering exclusive songs as preorder bonuses:

As with the first game's Best Buy-exclusive Janet Jackson song "Control," expect these songs to become available to all as regular DLC in the future. Speaking of which, don't forget that a huge Dance Central DLC sale is going on through at least the next two weeks.

Dance Central 3 launches on Tuesday, October 16 and features 2 player local co-op. We'll have a full co-op review around that time.