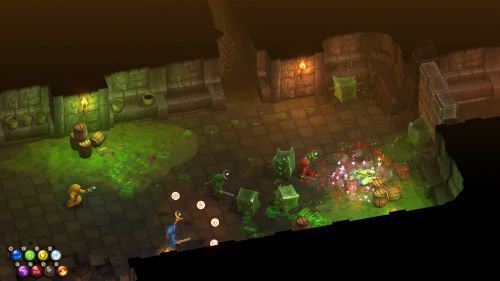 Magicka was released almost two years ago and despite a troubled launch the game got solid reviews and then a steady stream of both free and premium DLC.  Today the game continues to get content to keep folks coming back for the four player co-op spell weaving mayhem.  The new content is called Dungeons & Daemons and looks to be themed in the realm of dungeon crawlers with plenty of dark underground passages and of course...barrels.  Also included with the content are new monsters and obstacles.

Along side the content is a brand new patch which fixes and enhances A TON of stuff.  Don't believe?  Just look.

Fixed a pathfinding crash. Took us a bit, but we found it.

Fixed disappearing boss Vlad. Turns out he was just at the bar up the street.

Fixed a crash when killing frozen Khan (and possibly other bosses). KHAAAAAAN!

Fixed camera issue when being revived by the fairy. Fairies weren’t previously aware of auto-focus.

Fixed NPC spellcaster AI sometimes freezing up. After taking some public speaking classes, though, the NPC finally warmed up.

Mobs are now able to spawn their own kind upon death. That sounds kinda gross, actually.

Fixed a crash with the Performance Enchantment magick. Talk to your doctor first.

Fixed a crash that occurred when firing a water projectile during a level transition. That’ll show those pesky levels who’s boss around here.

Fixed scores being inconsistent between client and host in challenges. Issues resolved with just a couple trust falls.

Fixed script delays being reset when restarting a challenge level. No more delays, the movie will finally be coming out soon.

Fixed element icons getting stuck highlighted when disabled (as in Elemental Roulette). Now if we could only get our car’s dome light to turn off.

Fixed a crash where players were gripped during level transition. Now they’ll just be gripped in anticipation, amirite?!

The content is out now and available to purchase from Steam and directly from Paradox.  It'll set you back $3.99.  Magicka supports four player local and online co-op.