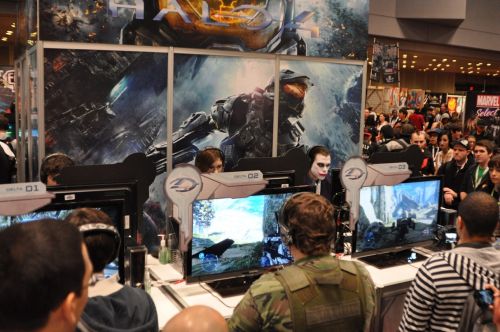 Being an East coaster and an hour outside of NYC, every year I feel obligated to hit up New York Comic-Con despite hitting most of the previous conventions in the year.  I'm not what they'd call a comic book nerd by any means, but I do appreciate the art form quite a bit and love looking at all the wares the show has to offer - especially the statues.  NYCC has always been a great hub for videogames too, so off I went to the city.

This year's show was insanely crowded on the day I was there, in fact, they actually had to close the convention center for a bit because it was at capacity.  Combined with a diminished videogame presence and I couldn't help but be a little disappointed in what I saw this year.  I guess the end of the console lifecycle has taken it's toll.  That said there was some good stuff - Sony and Microsoft had decent sized booths and Halo 4 had a great presence with a huge line to play some co-op.

Enjoy some random pictures from around the show floor.