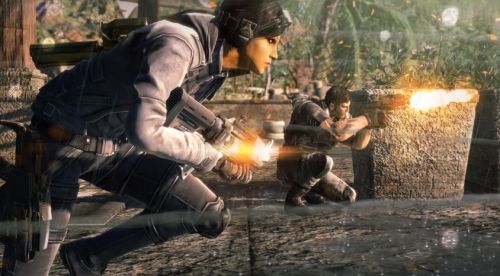 Remember that Overtrike Fuse trailer from E3 2011? Boy, that sure looked cool. Then Insomniac changed the look and feel of the game and dropped this video on us. People were considerably less impressed, if Youtube "Likes" and "Dislikes" are anything to go by...

Developer Insomniac Games must have heard the rumblings of nerd rage. Today, they distributed an 18 minute long video that goes to great trouble to showcase the characters, weapons, powers, and story of Fuse. Do yourself a favor and take the time to watch this bad boy. Feast your eyeballs on the "Fuse power progression system," "lethal teamwork," player "leaping," and all the other potential buzz words Insomniac president Ted Price crams into the presentation. Let us know what you think.

Can anyone think of another four player cooperative game, you know, something that focused on character progression and skill trees, that underwent an entire graphical overhaul, and then went on to have any success? I bet you can. Borderlands originally looked like this:

Everything seemed to work out okay for the folks at Gearbox.

Fuse supports two player local co-op, four player online co-op, and combo co-op. It is expected to launch next March on the Xbox 360 and PlayStation 3. Be sure to check out our Fuse hands-on preview.