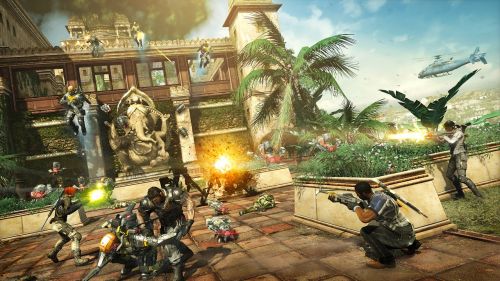 It was last October that Tally went hands on with Fuse, the upcoming action game from Insomniac.  You can check out that preview for the backstory of Fuse and a bit about the characters themselves.  Recently EA held another preview event in NYC and I went hands on with the game this time, checking out both the co-op campaign and the co-op mode called Echelon.

It's hard to put my finger on exactly what kind of game Fuse is, or rather, what games it reminds me of.  There's definitely a hint of Uncharted there, and even a bit of Kill.Switch.  You'll even find some Gears of War inspiration.  Whatever the DNA is of Fuse, Insomniac have created a gaming offspring that I think will be pretty special for co-op gamers.  The four characters and their weapons are clearly designed to work together and Insomniac is doing everything it can in the polishing stage to push players into co-op play.

First some basics.  The campaign can be played with one to four players, with all four characters always being  present during a mission.  At anytime you can bring up a radial menu and jump to a character that isn't being controlled by a player.  There's an overarching experience system, when you level up a character you can unlock weapon abilities and upgrades. This is persistent across both the campaign and the Echelon mode giving players incentive to play both.  The game is running on a proprietary engine, and graphically, it's on par if not better than a lot of AAA titles out there.  Vibrant colors, detailed environments, and plenty of effects. The highlight without a doubt in Fuse are the weapons.  I started the level out as Dalton, he's basically your tank;  his special weapon is able to deploy a giant shield that'll stop bullets and suck up grenades.  Get close to enemies while holding it and you can vaporize them.  It's incredibly satisfying and it looks like a giant wall of Matrix slowdown.  I also jumped into Izzy, she has a gun that is capable of freezing enemies, where once frozen you can shatter them.

Now here's where things get interesting and Insomniac is really trying to drive co-op home.  There's an arcade like point system in Fuse where you'll earn points for every kill.  You can combo your kills between players to maximize points.  So Izzy can freeze, Dalton can put up a shield and Jacob and fire through the shield and finish off the enemy with his Arc Shot.  Triple combo, mad points, lots of destruction.  Working together like this also fills your Fusion meter.  Once the meter is filled you can activate it to give the entire team unlimited ammo for a short period of time and also instantly revive any downed allies.  It basically tells everyone to go into ass kick mode.  During my playtime with the game, it definitely came in handy to save it for tricky situations and save the team from almost certain demise.

I was playing Fuse in two player co-op so we were able to jump between characters and get a feel for everyone.  For the most part character movement was smooth, the cover system was very forgiving snapping the player where I wanted to go with ample room, and the environments weren't just hallways.  It's here that the game reminds me a bit of Uncharted because you'll actually be climbing and jumping around with some minor platforming.  In one section of the game I was actually climbing pipes to get around some lasers - which I then hacked to let the rest of the team pass.  I was told there'd be a few of these minor puzzles to break things up. After the campaign we dropped into Echelon mode - which was described to me as a bit like Smash TV.  Yeah, my ears perked up too.  In reality it's like a cross between Mass Effect 3's co-op mode and Smash TV that takes place across six maps.  There are 12 waves of enemies to face off against and each wave has a random objective.  On waves 6 and 12 you'll face off against a boss.  The objectives seem to range from guarding something, killing something, and not being killed.   Always a good thing.

What makes Echelon different is that the enemies will drop loot - literally drop gold bars, bags of money, and other goodies for players to pick up.  They can then use this to buy special team perks that are only available in Echelon.  There's further incentive to play because you can continue to level your campaign characters here.

Once again I dropped into two player co-op for Echelon.  The map looked like a warehouse yard with slick looking weather effects.  The action was a lot more chaotic than what we saw in the campaign, but the AI did a good job of holding up their own, reviving us one we couldn't get to each other and using their special abilities in cases where you'd think they should be used.  If a player goes down in Echelon mode and bleeds out, they only need to sit out a round - unlike the campaign where bleeding out causes a mission failure.

All in all Fuse really impressed me.  This is a game that was clearly designed from the ground up to be completely cooperative.  Every character ability and weapon feels like it works together with another, and the characters drop into roles really well.  A lot of times folks become frustrated with AI companions in a co-op game, but from what I've seen, that shouldn't be much of an issue in Fuse.  With a few months to go to polish the game Fuse could easily be one of the best co-op games this year.

Fuse will be out on the Xbox 360 and PlayStation 3 this Spring.  It features four player online co-op, split-screen co-op, and combo co-op support.