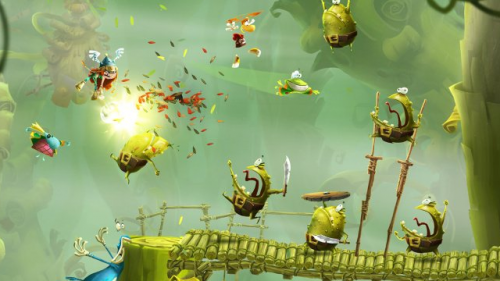 Hey there, folks! If you’re somewhat curious about how the Wii U controller might be used in a future co-op title, then we have a nice video for you to watch. Recently, a fantastic trailer of Rayman Legends’ 5-player co-op gameplay was uploaded, and we got pretty excited to try a game that maximizes the potential of couch co-op.

While the four main players, who take control of Rayman, Globox, and the Teensies, traverse through the levels mainly on foot, the fifth player seems to act as a supporting role to the team as a small fly-like creature (named Barbara), to triggering special, environmental bonuses and Lum collection. That fifth player plays out their actions specifically on the Wii U controller touch pad, accessing these bonuses that the other four wouldn’t normally be able to otherwise. Drop-in, drop-out capabilities also make the co-op mode in Rayman Legends a much easier game to join in whenever you feel like contributing to the adventure.

Now, even though there are some rumors of a Rayman Origins 2 title coming out next year, don’t get all overly excited just yet, Rayman fans. As of right now, there isn’t enough solid evidence for us to make that call ourselves, and Ubisoft still has no comment on the matter. For now, seeing a 5-player co-op game is more than enough for us, despite all the new Rayman content seeming to pop out everywhere. We do is look forward to the large number of co-op players (on the same game) we’ll be playing with this Nintendo Wii U launch game, and so should you!