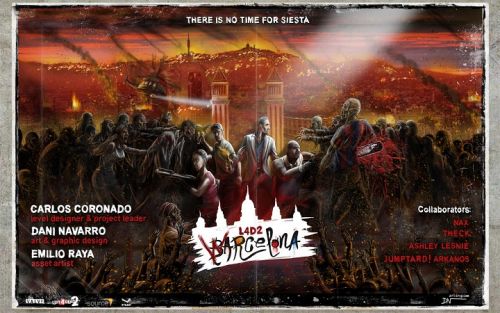 Barcelona is one of the must see cities of the world; the culture, the food, the drink, the ambiance.  All of this would be undermined should the dead rise and walk the Earth.  This is exactly the turn of events in the Left 4 Dead 2 user-designed campaign Warcelona, available now to download on Valve's official servers on PC.

This fan-made campaign contains 4 maps that tracks the journey from Sant Roc Church to the National Museum of Catalonia in Barcelona.  I've been to both of these places and although it is not an exact match to true life, it is an impressive recreation.  The 4 player co-op that makes the series essential for any Co-Optimus reader is still present, but as of the moment the installing process is a little cumbersome.  The Warcelona Team are working on a way to improve this.

The story spins off from where the second game finished:

Thirteen weeks after the first infection on America, regardless of the high security measures taken by European governments, a plane crashes in the outskirts of Madrid and chaos gets hold of the continent. Effecting an aggressive anti-infection policy, France has closed its borders with Spain and ordered to shoot each and everyone who tries to cross –infected or not. A massive exodus takes place from all over Spain to the most important city on the East of the country, where there is supposed to be a grand evacuating plan by CEDA and the Spanish Military: Barcelona.

In Warcelona, you take the role of the original characters of Left 4 Dead 2, who are refugees in a dilapidated church for survivors in the middle of a wrecked neighborhood in Barcelona. They decide to go out and try their luck with the CEDA evacuating plan.

PS: will you find the secret zone?

Will you make the journey to Europe to take on the zombie hordes?  If you do, check out the Camp Nou whilst you are in Barcelona.