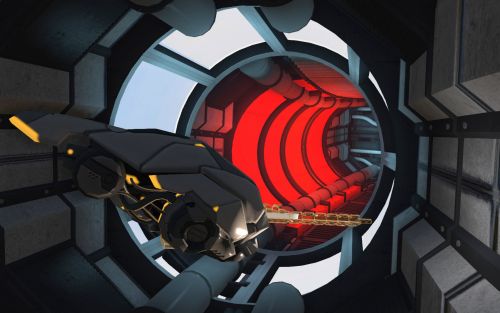 The alpha has come and gone, and Retrovirus is now kicking into beta mode. Dylan Barker, game designer/community manager for developer Cadenza Interactive, told us this past summer that plans were in place for the game to still see release, no matter what, and it appears the next phase has arrived. The best part? Unlike the alpha, which was limited to just some of the single-player missions, the beta comes with... wait for it... co-op modes! The beta is not free; though it is essentially a pre-order of the game as the full thing will unlock once it's released early next year, we're told.

With a new phase of development, comes a new trailer and a few words from Dylan. We've got it all after the break.

Betas can mean different things as far as what you're getting. We sought to set the record straight and asked Dylan what co-op features players will have access to and what folks buying the game now can expect as far as compatibility with other digital distribution platforms:

We have a lot of different ways to experience co-op. First is the campaign, which can be played with up to 4 friends. The enemies get harder, and some of the puzzles are different with more people in them. Next is our Challenge maps, which can be played alone or in co-op. These are usually objective based, play-for-score maps. Finally, it's possible to play our "competitive" flavors of multiplayer as players versus bots.

Matchmaking this time is handled entirely by Cadenza's own networking stuff, meaning players who buy on any platform can play with each other from the beginning.

We're still developing maps for co-op challenge mode, so we're talking with the community about things they enjoy and stuff we've found we like.

[Additionally,] players who buy Retrovirus from any non-Steam store will receive Steam keys if we are successful in our Greenlight campaign, including Gamestop customers from our preorder alpha.

There you have it. A beta with a full co-op campaign experience and challenge maps. To get you even more excited for this prospect, here's the latest trailer.