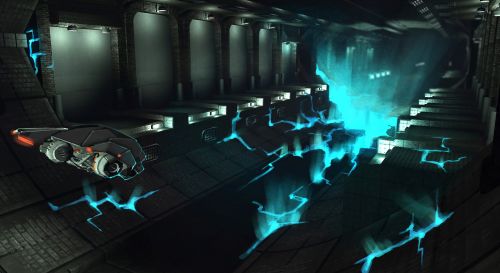 PC and XBox Live Indie Gamers may remember a little title a couple years back called Sol Survivor, a cooperative tower-defense game that helped to kick-off the Indie-Ana Co-Op feature. The studio responsible for that game's development, Cadenza Interactive, has announced today that they are releasing their second title. Retrovirus, a "six degrees of freedom" shooter, will include an entirely cooperative campaign mode in addition to a few other multiplayer modes that, we can only hope, will also be cooperative in nature. Full details can be found after the bump.

Players will enjoy an action-oriented shooter focused on movement along six axes, in a world designed for indoor flight. Retrovirus will put players in control of an advanced anti-virus program within the game world, putting them up to the task of cleaning a dangerous infection from a single computer which hosts the game’s setting. In addition to a challenging, story-driven single player campaign, Retrovirus will deliver cooperative and competitive multiplayer modes for group play. Features:

Retrovirus is in the pre-Alpha stages, with a release date to be announced. Alongside the announcement of Retrovirus, Cadenza is also happy to be releasing developer blogs, production renders, concept art and other Retrovirus content for curious fans and media at the new and improved cadenzainteractive.com.

To go along with the release announcment, we've got a handful of concept and current in-game renderings that can be found in the gallery below. The idea certainly seems like a solid one and, based off the description and screens, harkens back to games like the mid to late 90s Descent titles on the PC. Given how well Cadenza initially implemented, and then improved upon, the co-op in their first title, we certainly have high hopes for this one.