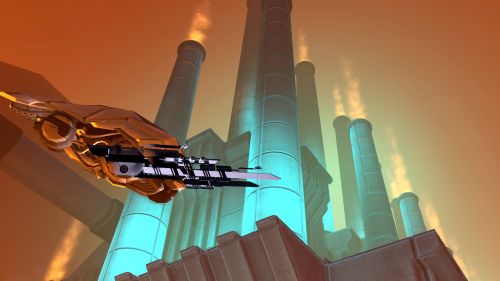 There are a lot of Kickstarter campaigns out there for a variety of projects ranging from boardgames to videogames to underwater rovers. One such project that we noticed, and of which we brought word last month when it started up, was for Cadenza Interactive's next game: Retrovirus. Offering a six-degrees of freedom style of gameplay (think Descent) along with a fully cooperative campaign, Retrovirus is a bit of an ambitious title for the relatively new studio, but it's a project they are very passionate about and are eager to share with the videogaming community. In fact, they now have a playable alpha version available for download so you can get an idea of what the game's about. Check out some gameplay footage after the break.

The funding goal Cadenza is trying to reach is $75,000, a goal that might have seemed a bit ambitious when all of this started, and which certainly seems like a long stretch as the Kickstarter campaign is drawing to a close and they've only reached $23,000. I had an opportunity to speak with Dylan Barker, one of Cadenza's designers and their informal community manager, about some of the hurdles they've faced with the development of their second game, why they chose Kickstarter, and other topics along the lines of indie game development. One of those topics was what achieving their Kickstarter goal would mean and what backers/gamers would get in addition to the stated rewards. His answer? "More co-op." Reaching the funding goal means not only do they have more time to really polish and refine everything, but Dylan also has plans for including specific co-op mode/levels that would be akin to the cooperative mode in Portal 2.

The full interview with Dylan will go up later this week as a part of our Indie-Ana Co-Op feature, but for now, here's a quick snippet wherein I ask Dylan why Cadenza was "convinced of co-op's value".