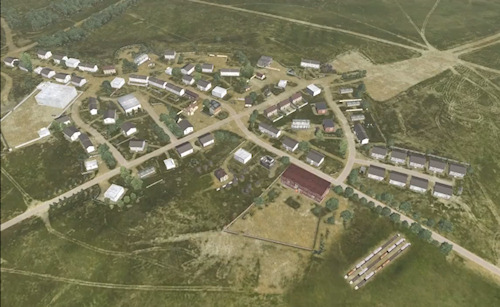 Normally when we talk about adding a ridiculous amount of players to a co-op game, it doesn't quite work out like we hoped.  The same can't be said for the military tactical game ArmA 2.   There's a mod in the works that is being dubbed as the "Headless AI Client" and it's allowing for some truly impressive battles to take place featuring dozens, even hundreds, of players with realistic and intelligent AI while still maintaining solid frame rates.

We have two videos today from the dedicated ArmA group called Shack Tactical - in them they showcase some truly amazing cooperative gameplay.  With so many players one would expect chaos, but instead what we get is more organized chaos.  Like a real military platoon, the groups are broken up into sections with teams - all with leaders commanding  their respective teams and full voice chat for effective communication.

The first video runs about 20 minutes and demonstrates a 40 player co-op scenario split among 3 sections of troops.  As a co-op gamer, you have to appreciate just how well people follow their roles.  This video is one of the first tests using the "new AI" and shows just how brutal they can be.

The next video is called Operation Chimney Sweep and showcases a raid on a town with over 100 soldiers involved.  The entire town is over run and the group clears each and every house of enemy combatants.  This video is around an hour long and there is a bit of downtime as the soldiers plan their maneuvers carefully before clearing each sector.