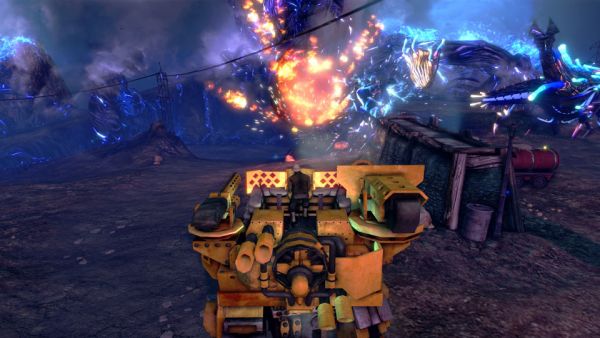 Tim Schafer’s Double Fine studio has been coming on strong recently. After putting out Brutal Legend a few years back they’ve come right back with Costume Quest and Stacking. With a Sesame Street game for Kinect on the horizon its hard to believe the studio has time for another title - but they do - and that game is a downloadable title for Xbox Live Arcade called Trenched. We got some hands on time with the game at PAX East and came away pretty impressed with another take on the tower defense genre.

Trenched is set in an alternate World War 1 where two evil geniuses are battling it out for world domination. Players create and customize a Trenched mech, a giant robot who’s top half is literally a trench with sandbags for an army guy. By playing missions and earning money, you’ll be able to customize the look and abilities of your robot between scenarios. The game takes place over three military campaigns with five missions in each campaign. The campaigns themselves are capped off with a giant boss battle.

Like we said, Trenched is a tower defense game, though we were told by a representitive it takes some liberties with the formula. Enemies do come in wave and in different types, but they aren’t funneled through any specific area. Players can call in turrets and other upgrades to defend themselves - but your best defense is going to be a solid co-op team. That’s right, Trenched will support four player online co-op.

While there’s no drop-in/drop-out support, players can join mid-campaign during the loadout section - a perfect place to show off your Trenched mech creation. The game will scale the difficulty of enemies as well based on the number of players. You’ll see numerous enemy types during combat - from beserkers that rush you and try to explode to aerial units that swoop in and attack. All of this takes place in brightly colored and richly detailed maps that have their own unique style.

Playing this game co-op was not only fun, but it seems entirely necessary in order to enjoy it. While it’s possible to build your own turrets and upgrade them as a single player trench-mech, it’s easier to do so when each co-op player has their own money supply (picked up after enemies are defeated by holding down the right-bumper) to crank into upgrades. There is also the very handy buddy revive system in case you are ever overwhelmed in your mobile trench - but it’s taken one step further as my trench-mech never bled out while I was waiting for a revive.

Trenched is out this Summer on XBLA.