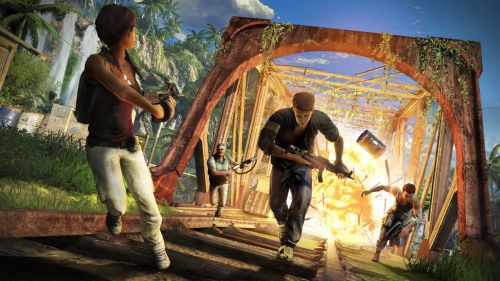 Holy cow! It's December already! Where did 2012 go? I'm still writing "2007" on all my checks, so it's been a heck of a transition for me. The bad news is that there aren't many releases left for the year. The good news is that you'll finally have time to finish all the great games that are out. Enjoy.

Cabela's Dangerous Hunts 2013 (Wii U) The annual Cabela's release came out for the older systems a few weeks ago. If you've got a new Wii U and like shooting animals in the heart, this may be the game for you.  2 player local co-op

Far Cry 3 (360,PS3,PC) Sneak through a gorgeous jungle and stealthily dispatch each one of your enemies. Or make a bunch of noise and blow everything up. Play how you want. Far Cry 3 is a big, violent sandbox. The co-op, while quite fun, has limited maps, though. You've been warned. 2 player local co-op, 4 player online co-op

Guardians of Middle-Earth (XBLA,PSN) Finally, the MOBA genre is making it's way to home consoles! What's a MOBA, you ask? I really have no idea. As near as I can tell, you control one dude who has all sorts of powers and you have minions that will go out and act as cannon fodder for your enemies. Team up with other players to destroy opposing player or AI bases. Apparently it's insanely popular. 5 player online co-op

Marvel Avengers: Battle for Earth (WIIU) This title came out for the Kinect back in October. Now it's finally coming to the Wii U. Move your body to use special skills and abilities of Marvel's Avengers. Beat the bad guys, save the planet. You know, super hero stuff.  2 player local co-op

Here are the retail releases for the week, complete with Amazon links. If we missed anything be sure to let us know in the comments section.