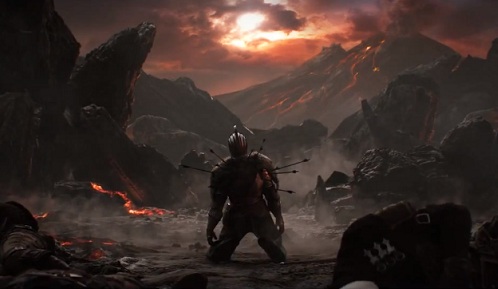 If you're anything like me, last Friday night you were glued to your TV screen, watching Spike TV's VGAs. Wasn't it cool when that one thing happened? Okay, you got me. I wasn't watching the VGAs. And I'm not hating on Spike TV's awards show, I hate all awards shows equally, regardless of subject matter.

Obviously I was doing something incredibly cool, like browsing Reddit so I could make fun of people who browse Reddit. Then Nick pinged me and said they just announced Dark Souls II on the VGAs. I was like, "Oh snap!" and immediately went on a YouTube hunt to see if I could find the video. All of the videos were taken down or of eye-rending quality. So I told myself that publisher Namco Bandai would probably post a clean trailer, minus all the Spike TV stuff, on Monday. They did.

Now you've seen it, time for insane speculation! First and foremost, I will remind you that Bethesda invented dragons for the sole purpose of appearing in Skyrim, and any other game using dragons is a blatant rip off. Now let's talk similarities to the original Dark Souls: There's a rope bridge that looks like another rope bridge, and a dragon that is similar in appearance to another dragon. Buildings look like buildings, and a cave looks a lot like another cave. Also, I'm what you would call an "expert" in breathing fire. Homeboy appears to take a volcanic load of dragon breath to the face, sans shield. If he wasn't an undead hollow before that blast, he is now. Hell, he may be all the way dead. Lastly, I think I saw a dragon docking sequence that used a purging screen similar to that of Blade Runner and Alien, so all three stories obviously take place in the same universe. At least, that's what I got from the trailer. You may get something else out of it.

Oh, and we also got an official press release. You know, real information. I'll cut through the fluff and let you in on the good stuff:

Dark Souls II is currently being developed by From Software. - Good start.

"Dark Souls II will continue a legacy of goading its passionate fan base with unrelenting challenge and suffering that are considered a hallmark of the series; while presenting new devilishly devised obstacles for players to overcome." - Okay. I'm digging that.

Dark Souls II will be available for the Xbox 360, PlayStation 3, and PC. - Alright. It's a current gen game, and it will appear on PC, so no need for any pesky online petitions. Cool.

The series creator and director, Hidetaka Miyazaki, will be taking the role of supervisor. Tomohiro Shibuya will be taking over as director. - Demon's Souls and Dark Souls had great, if a bit esoteric, direction. Should be interesting.

"Dark Souls II will feature a new hero, a new storyline, and an unfamiliar world for players to survive in while delivering its signature brand of unrelenting punishment that players hunger for. Epic battles with gruesome enemies and blood-thirsty bosses await adventurers as they traverse through a devastated world filled with death and despair; only those who are strong willed or cunning can survive this journey to achieve great glory." - Yes to all of that.

The rest of the press release goes on to say Dark Souls II will stick to it's roots while still drawing newcomers to the series.

Many people have speculated that the game will be dumbed down or somehow made easier. That might happen, it might not. Some internet message boards are in total freak out mode, as if the game is now an FPS with conversation wheels and voice chat. I don't think that's going to happen. Getting backstabbed by a stranger is brutal. I can't bear to think what would happen if the young denizens of Xbox Live take a liking to Dark Souls II. That would be the scariest game imaginable. I just want difficult enemies, an awkward co-op system, and a nonsensical story that is open to insane interpretation. Is that too much to ask?

I expect Dark Souls II will be out sooner, rather than later, since it's set for this console generation. We'll let you know more information as soon as it becomes available.