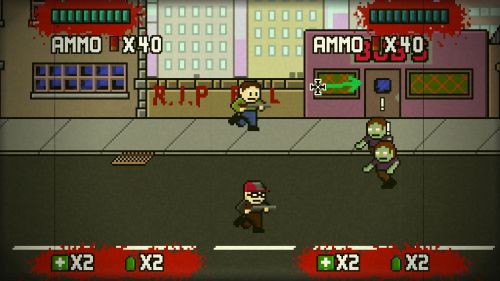 One of my favorite indie co-op games from last year, and even still today, was Can’t Strife Right Studios’ zombie shooter meets 8-bit beat ‘em up, Dead Pixels. It was a fresh take on a genre/theme of games (i.e., zombies) that is starting to wear its welcome out a bit. Between the ‘70s film grain effect, the nods and winks at various zombie games/films that came before, and the RPG elements, Dead Pixels was the kind of game that got me started on the whole indie kick in the first place. Now, the joy of killing 8-bit zombies can be shared even more with friends and family as Dead Pixels has arrived on Steam, and it has brought with it a handful of goodies.

Since it is the season, we’re also celebrating the game’s release on Steam with a couple of code giveaways. Full details for how to enter and win can be found below.

The original XBLIG release of Dead Pixels included just one campaign mode, which could be played locally with a friend. There were a few different difficulty levels that allowed you to determine how many streets you and your friend had to make it through before reaching the only means of escape, an airplane, but that was it. As time went on and more copies of the game sold, the developer held true to his promise to release additional modes for the game for free. These included “The Solution,” a slightly more aggressive take on the main campaign where you chose from one of six characters (each with different abilities) to try and fix the zombie outbreak, and a “Last Stand” mode, fight off as many waves/hordes of zombies as possible. Both modes helped breathe some extra life into the game, and provided different challenges of their own.

The Steam version of the game includes “The Solution” and “Last Stand,” which we’re told by the developer has had some slight tweaks/revisions to be more of how he wanted it to be, along with online leaderboards so you can compare your best survival scores with friends, and Steam achievements. Co-op play is still local only, but it supports a variety of gamepads to allow you and your friends the same comfort of playing together without crowding around the same keyboard. Keyboard and mouse controls are also supported, if you prefer. A variety of characters, many of whom have names that should be familiar to zombie fans, are available in "The Solution"

At a price point of just $2.99, you get a lot of game out of Dead Pixels; a lot of good game, at that. Despite having played through the game last year when it was released, I found myself playing through it all over again when I had intended to hop in “real quick” to just take a look around. It really is that fun.

If this sounds like the kind of game you’d be interested in playing over the holidays, but can’t quite spend any more on games, then you’re in luck. CSR Studios has been kind enough to provide us with a couple codes to give away here on the site. To be entered to win one of these codes, simply leave us a comment below with your favorite zombie movie and/or game. Two winners will randomly be chosen next Wednesday, December 19. So leave a comment and good luck!