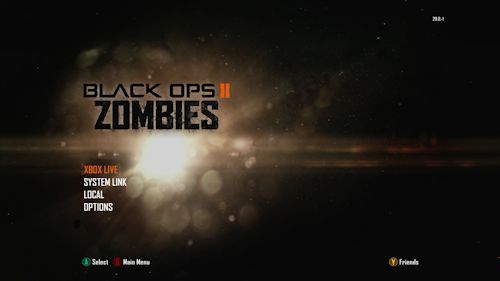 Call of Duty: Black Ops 2 saw itself a major patch this week, applying fixes to all three of its major game modes including story, multiplayer and zombies.  PC gamers got even more enhancements with various fixes for hardware configurations, graphics optimization, and much more - but it's co-op gamers that should be excited about what the patch contains.

There's over 20 fixes in place for the game's four player co-op zombie mode, including several bug fixes, like the ever popular "falling out of the map" bug that I thought was eradicated in 2008.  Other enhancements including improved zombie AI, a fix for the mystery box so you can actually find it, and other random annoyances.  PC gamers once again get some bonus fixes like volume control for voice chat - so you can actually hear the screams of your teammates over the roar of the zombie horde.

Here's the full patch list.  A lot of these fixes were rolled up from multiple 360 and PS3 updates.  It's unknown if the Wii U version is effected.

Campaign Changes: Multiplayer Changes: MP Gameplay Balancing: The following is a list of numerous gameplay balancing tweaks that were made after thorough review of statistical data from player usage of weapons, equipment, perks and scorestreaks since launch.