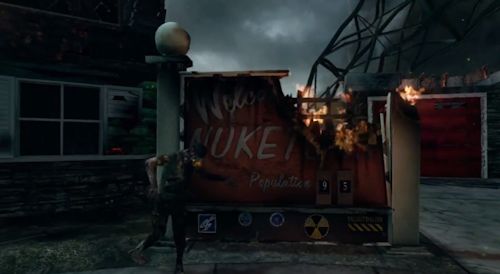 Right now Call of Duty: Black Ops 2 season pass subscribers now have access to a new map for the game's four player co-op zombies mode.  Set in a bombed out version of the classic multiplayer map Nuketown, Nuketown Zombies is a survival only map for players to take on the undead.  The new map is accessible from the zombies menu in Black Ops 2 and on the selection screen you need to choose Nevada instead of the default tranzit area.

We played a bit of the new map last night and while it's cool from a nostalgia standpoint, it's one of the weakest maps for zombies survival for a few reasons.  The first issue is the lack of areas to defend, while other maps have plenty of windows and doors to board up for bonus points and to slow the zombie hoard, Nuketown Zombies has almost none.  If you plan on defending yourself in a house, you'll have to make sure your entire team is on board.

There are very few choke points as well, and fighting in the main area between the houses can be a death trap because of debris and other items that get in your way when you try to run.  I managed to get in a good group and we found the area behind the one house with the garden and shed is perfect for defending, especially when the magic box spawns right there giving you easy access to more weapons.

A nice touch on the map itself is the zombies are themed like military, radioactive cleanup crew, and civilians - much like what you'd find in a nuked out area.  The other visual elements of the map are top notch, including the gigantic mushroom cloud that looms overhead.

Overall you aren't going to want to purchase a season pass just for this map, but if you are into the game's competitive multiplayer, then this should be a no brainer.