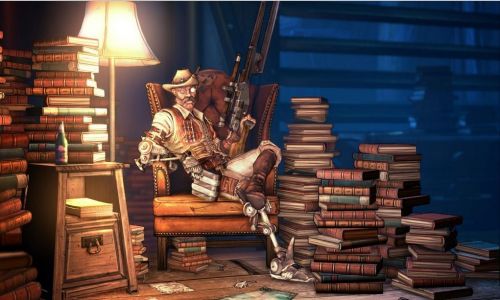 The third installment of Borderlands 2 DLC, "Sir Hammerlock's Big Game Hunt," was made official via Twitter yesterday. Everyone who's still interested in roaming the wastes of Pandora heard about it a few days ago, when several key details were leaked in the latest title update. Well the Bonerfart is out of the bag, isn't it? "Sir Hammerlock's Big Game Hunt" will be arriving on your gaming machine of choice next year. Wait, next year?

Yes, that's right. DLC número tres will be dropping on January 15th. This is why we can't have nice things. See what happens when you share leaks? Gearbox had to go and announce this DLC early. All of these amazing details are out, and we have to sit here in anticipation for a whole damn month. Thanks, internet! (I'm aware I'm part of the problem. I'm dealing with it.) If you want to torture yourself even more you can check out the amazing launch trailer after the break, along with a half dozen badass new screens.

"Sir Hammerlock's Big Game Hunt" will take place on the new continent of Aegrus, which does not appear to be another decrepit junkyard. It looks rather lush. Awesome. The story will be driven by a new villain who wants to "restore the legacy of Handsome Jack." We can't have that now, can we? I'm sure old Hammerlock will have quite a few missions for us, too. "Big Game Hunt" will include new loot, new enemies, and a sweet new four man fan boat. It's right below this sentence. Look at it. I know you want to. You can see more unofficial details of Sir Hammerlock's new adventure right here. WARNING: There are some light spoilers. You've been warned. I should mention that there is absolutely NO SIGN of a level cap increase. I know. We all want a level cap increase. As I've said before, you'll have to reset your Badass rank if you really want to increase your stats.

Like everything else in Borderlands 2, "Sir Hammerlock's Big Game Hunt" will support two player local co-op, four player online co-op, and combo co-op. It be available on the Xbox 360, PlayStation 3, and PC for $10, or 800 MSP. It is also a part of the Borderlands 2 Season Pass. The wait begins.