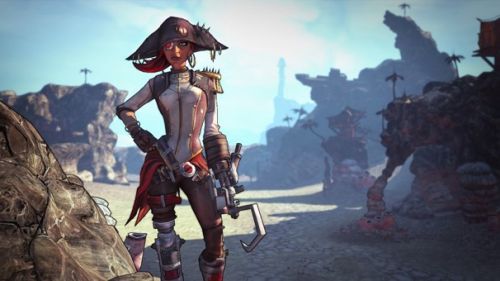 I was going to start with something like "Thar she blows," but I thought that would be uncouth. Besides, Melville is a little too dry for a Thursday. Anyway. Borderlands 2. DLC. More of it. Dropping next week. "Capitan Scarlett and Her Pirate's Booty" will be available on October 16th. I can only assume that Ms. Mechanically Enhanced Sexy Pants up there is Captain Scarlett. She's got a badass claw for a hand. Kinky.

The new DLC will take place on an ocean of sand. A pirate theme permeates the landscape. Players will be hunting yet another treasure. Yes, we have another quest that coincides well with the main theme of Borderlands 2: Looting that epic booty.  You can read more details on the DLC here. For now, check out the cool image below of the new sand skiff vehicle, which is something totally different from the skiffs in Return of the Jedi. It appears to be a two seater, but we'll know for sure (and so will you) next week. "Captain Scarlett and Her Pirate's Booty" will launch on the PC, XBLA, and PSN on October 16th. It will cost 800 MSP or $10. This is the first of four DLCs which are included in the Borderlands 2 Season Pass. The Season Pass will cost you 2400 MSP or $30. For all you English majors out there, that would be four campaign DLCs for the price of three. Just buy the pass.

On a less positive note: There has been no news regarding an increase in the level cap, which according to my Friends List is something some of you desperately need. A few of you have multiple characters at level 50. Amazing. If I remember correctly, "The Zombie Island of Dr. Ned," the first DLC for the original Borderlands, did NOT increase the cap. So don't get your hopes up.