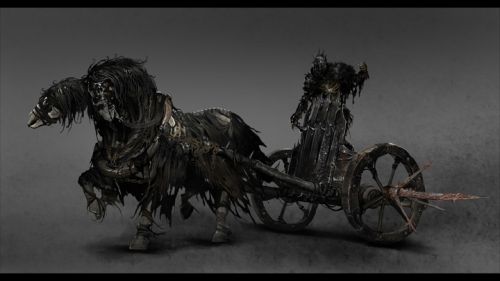 New concept art has appeared on the Japanese Dark Souls II website. The recently added image gallery is primarily made up of stills from the sexy announcement trailer that debuted at the Spike TV VGAs. That's nice, but the last eleven images are really interesting. A handful of new environments, items, and ghoulish enemies can be found in the gallery. That badass chariot up there is part of the set. I may be mistaken, but that appears to be a two headed undead horse. Fantastic.

Fans have voiced their concerns that the sequel to the hardcore fantasy game would be "dumbed down" in the name of accessibility -- such as toning down the difficulty, having a plot that made sense, an intuitive combat system, and a summoning system that worked consistently. I was having the same conversation with a fellow Co-Optimus staff member and Dark Souls enthusiast last night. We both agreed that as long as the atmosphere and tone of the game was preserved it would be great. Then we cut off Kalameet's tail, praised the sun, and went our separate ways.

As you can see by the menacing images in the gallery below, the fine folks at From Software seem to be on the right path.

Dark Souls II's multiplayer system has yet to be revealed, but we'll be sure to let you know all the co-op details when they become available.